Carson Wentz Gets Compared To Baker Mayfield By One NFC Executive: ‘Maybe There’s A Ceiling’ 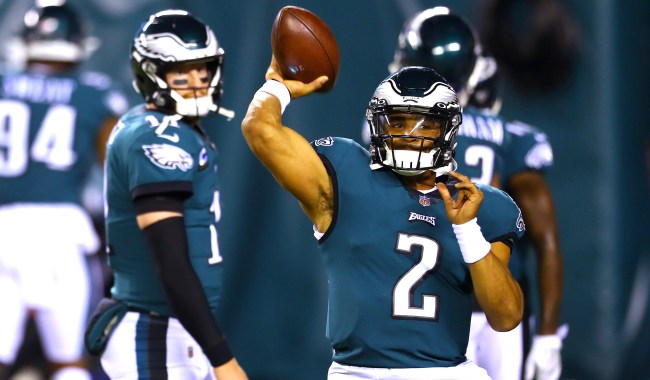 Eagles quarterback Carson Wentz has struggled more than expected since signing a $128 million extension and the drafting of Jalen Hurts by Philadelphia isn’t helping, according to several NFL executives.

The first year after signing the extension went pretty well with Wentz playing in all 16 regular season games (before being knocked out of the team’s first playoff game after throwing just four passes) for the first time since his rookie year, throwing for over 4,000 yards and leading the Eagles to a 9-7 record.

Following the 2018 season, however, it was reported that multiple Eagles teammates thought Wentz was “selfish” and “egotistical,” something he has reportedly since corrected.

Strangely, all of that didn’t stop the Eagles from drafting former collegiate national champion Jalen Hurts in the second round heading into the 2020 NFL season.

Now, this year the North Dakota State product is sporting an abysmal 73.4 QB rating and has thrown 15 interceptions to go with just 16 touchdowns after never throwing more than 7 picks in a full season.

There was much debate, prior to Wentz signing his big contract, about whether the Eagles would be better off keeping Nick Foles and trading Wentz. Brett Favre, for one, said the team should have stuck with Foles.

Now, with Hurts looming in the background, a source with knowledge of the inner workings in Philly says, Wentz was not happy with the pick, telling ESPN, “All that ground he gained over Nick, everything he fought past to get to this point, you pull it right back. Here is your franchise quarterback, the guy you paid a lot of money to keep long-term, and he’s having to prove himself all over again.”

One NFC executive even went so far as to compare Wentz to another quarterback enigma Baker Mayfield.

“He’s going through what Baker [Mayfield] is going through in Cleveland, where maybe there’s a ceiling to his play, but at least Baker has an elite running game, and they can hide him,” said the executive. “Wentz is out there taking all the bullets.”

A defensive coach who played against Wentz this season says he thinks Wentz is “trying to make big plays when they aren’t there” and “doesn’t trust the players around him” due to the number of injuries in the Eagles’ receiving corps.

Another factor that makes the drafting of Hurts so perplexing is that the Eagles’ are basically stuck with Wentz thanks to his contract as it would cost the team a $59.2 million dead-money hit if Wentz were to be released in 2021.

Even if they traded Wentz it would still cost the Eagles a minimum of $33.8 million in dead cap money spread over two years.

On the plus side, sort of, is the fact that the Eagles, at 3-7-1, are still only a half game out of first place in the NFC East. Unfortunately, Philadelphia’s remaining schedule includes games against the Packers, Saints, and Cardinals (a combined 23-10 on the year), with the Cowboys and Washington to finish out the season.