Carson Wentz Has Been Traded To The Indianapolis Colts 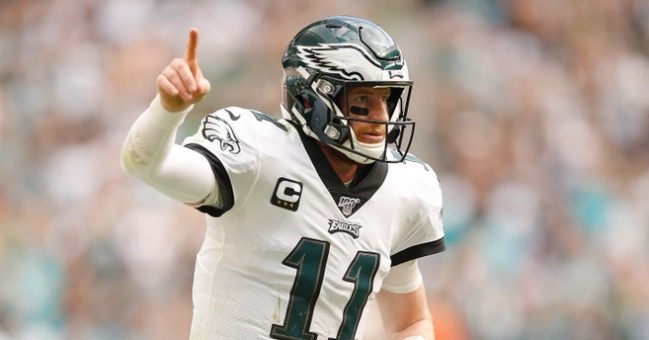 Former first-round pick Carson Wentz has been traded to the Indianapolis Colts, according to ESPN NFL reporter Adam Schefter.

According to Schefter, the Colts will be sending a 2021 third-round pick and a conditional 2022 second-round pick to the Philadelphia Eagles, who drafted Wentz with the #2 overall pick in the 2016 NFL Draft.

The 2022 second-round pick is conditional and could turn into a first-round pick. If Wentz’s playtime is at or above 75% next season OR if Wentz plays at least 70% of the plays and the Colts go to the playoffs, the pick becomes a first-rounder.

Philadelphia has agreed to trade Carson Wentz to the Indianapolis Colts in exchange for a 2021 third-round pick and a conditional 2022 second-round pick that could turn into a first, league sources tell @mortreport and me.

Wentz’s trade marks the end of his tumultuous era in Philadelphia, which saw the North Dakota State University product play at MVP levels prior to his injury during the Eagles’ Super Bowl-winning 2017 season.

After the Eagles won the Super Bowl with Nick Foles at the helm, Wentz was eventually reinstalled as the team’s starting quarterback the following season, but could never recover the form that made him an MVP candidate the prior year.

The downward trend continued into this season, as the Eagles drafted former Oklahoma and Alabama QB Jalen Hurts in the second round of the 2020 NFL Draft, eventually benching Wentz in favor of the rookie signal-caller.

Wentz’s move to Indy will likely be seen as a win for the crestfallen QB, as he’ll now be starting for a playoff-contending team that posses an elite offensive line, which only gave up 21 sacks last season. Wentz, over the course of his career, has been sacked 179 times so far.  He’ll also be uniting with head coach Frank Reich, who was the offensive coordinator in Philadelphia during Wentz’s career-best season in 2017.

Coincidentally, Wentz was traded just 19 days after Jared Goff (shipped from the Los Angeles Rams to the Detroit Lions in exchange for Matthew Stafford), who was the only player selected ahead of him in the 2017 NFL Draft.