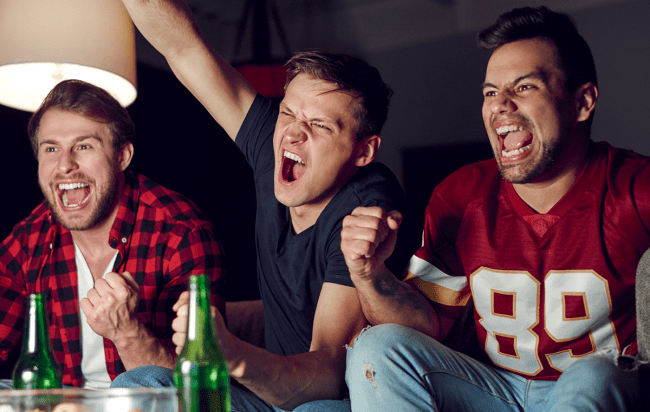 Next month will mark the first anniversary of the start of the Pandemic Life, which we’ll likely be forced to continue to endure for the bulk of 2021 thanks in no small part to the far too many people who’ve decided they aren’t going to let a pesky infectious disease responsible for the deaths of more than two million people stop them from doing whatever the hell they want.

By now, there’s no point in attempting to convince anyone who still views the many guidelines put in place to stop the spread as the ultimate inconvenience to change their ways—some of whom will undoubtedly be featured in the all-but-inevitable articles we’ll be treated to in the wake of Super Bowl LV concerning people lamenting their decision to attend the parties that probably don’t need to be held this year.

It should come as no surprise that the CDC is advising people to avoid in-person gatherings on Sunday, but it’s also well aware that some fans will be unable to resist the urge to get together to watch Patrick Mahomes and Tom Brady face off in Tampa Bay. As a result, the organization has put together a list of recommendations encouraging anyone who’s getting their party on to celebrate in a safe and responsible manner, including masks, social distancing, and the rest of the usual suspects you’re likely very well acquainted with by now.

Whether you’re emotionally invested in either of the teams that will be competing for the Lombardi Trophy or literally invested due to the wide variety of ways you can put money on the game, it can be hard to resist the urge to yell at the inanimate object broadcasting the contest or scream (whether it’s in ecstasy or anguish) at various points over the course of the night.

However, the CDC is asking fans to do everything in their power to eschew vocal outbursts that could send particles of the virus screaming into the air in favor of clapping or stomping feet. Of course, this is easier said than done for people like me who are physically incapable of aggressively pounding their hands together without yelling “LET’S GOOOOO!!!!” at the top of their lungs, but at the same time, it’s probably a good idea to at least attempt to exercise some restraint when you consider it those screams could result in your lungs not being able to function.