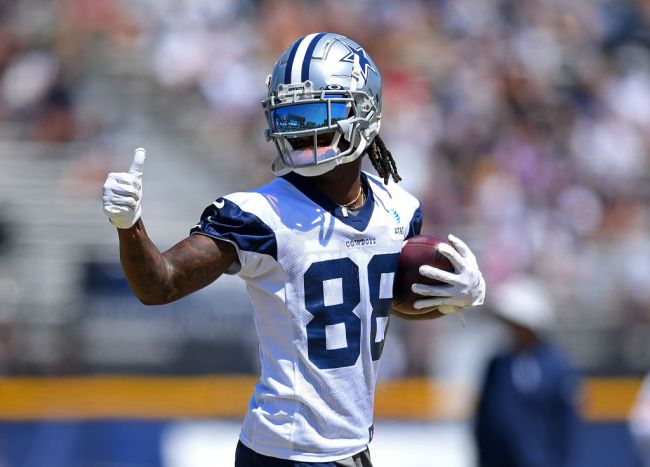 The NFL season is quickly approaching and things are starting to heat up at training camps across the league. That was certainly the case at the Dallas Cowboys’ joint practice with the Los Angeles Rams over the weekend.

As cross-division opponents, the two teams do not play each other this season so they took the time to learn from one another and get some work in against a live opponent. The joint camp phenomenon is extremely common and the Cowboys chose to host this year.

It is unclear as to why they chose to meet up in Oxnard, Calif. because the field is in such poor condition, but they did nonetheless.

Among the biggest storylines on either side of the ball came with the Cowboys’ passing offense. Dak Prescott is coming off of a shoulder injury in 2020 but should be back healthy and under center in 2021.

Should that be the case, CeeDee Lamb is expected to take big strides. The second-year wide receiver out of Oklahoma had 74 catches for 935 yards and five touchdowns last year and is poised for a breakout.

He sauced up Rams cornerback Jalen Ramsey during the practice.

CeeDee Lamb cuts it outside on Jalen Ramsey. pic.twitter.com/uY8mJooGJU

In Ramsey’s defense, Los Angeles appeared to be running a Cover-2 and the linebacker should have dropped into coverage. However, rumor has it that Ramsey is still running the opposite direction away from Lamb.

Chippy in the trenches.

As Lamb was busy smoking cornerbacks, the lineman went to work in the trenches. Things escalated quickly.

Cowboys left tackle Connor Williams was tasked with going head-to-head with the best defensive lineman in the league, Aaron Donald. He won the first round.

Connor Williams with a win against Aaron Donald 😳 pic.twitter.com/iH26hSrNM8

But Donald was still getting downfield and making plays.

Later in the afternoon, Williams prevented Donald from getting free in the backfield. When the play was over, they were both still latched on to one another on the ground.

Donald grabbed Williams’ facemask more aggressively and Williams wrestled him back to the ground. The dust up sparked a bench-clearing kerfuffle.

Players get a little bit antsy when they get to hit someone who is not on their team and it escalated to a small skirmish between Dallas and Los Angeles. Football is so back.