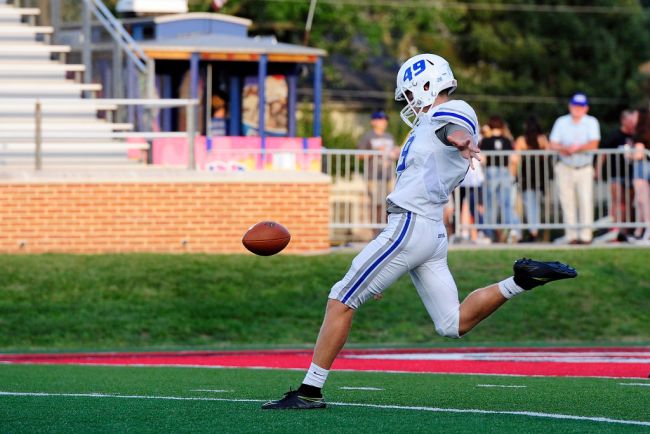 Central Connecticut State lost to Miami by a score of 69-0. It was a nice win for the Hurricanes, who have been extremely underwhelming thus far into 2021, and it probably could have been worse for the Blue Devils.

It was complete and total domination from top to bottom and from start to finish.  Amidst the beatdown, Central Connecticut pulled off the near impossible— a three-yard punt.

Freshman Aidan Clark lined up at his own 39-yard-line and set up to receive the snap. There was only one problem…

It went SAILING over his head.

Bad snaps are not uncommon in football. However, this was exceptionally poor and it landed nowhere near Clark nor his reachable radius.

It landed back at the 24-yard-line and kept rolling down to the 13. The 42-yard snap caused Clark to get on his horse to try and prevent a touchdown.

To his credit, he made a great play to get the ball and get off some semblance of a forward kick. His punt went about 45 yards for a net gain of three yards.

Here is another angle that shows a better look at the soaring snap:

Another angle of the 3 yard Central Connecticut punt. We’ve never seen a snap this high over the punter’s head. pic.twitter.com/i3FQLok1Cc

While the play itself wasn’t Clark’s fault, Central Connecticut State officially holds the title of Worst Punt of 2021. Congratulations to the Blue Devils.