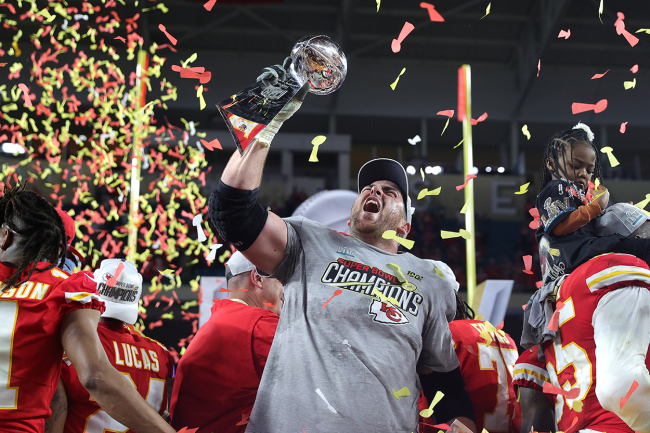 Laurent Duvernay-Tardif was selected by the Chiefs in the sixth round of the 2014 NFL Draft. He spent seven years with Kansas City and one year in New York with the Jets before announcing that he is putting his football career on pause.

Duvernay-Tardif, who was born in Quebec, Canada and played at McGill University, is one of four NFL players to have graduated from medical school. As of 2018, he is the only active player in the NFL with such a degree after graduating with a Doctor of Medicine and Master of Surgery.

Following his graduation, Duvernay-Tardif petitioned the NFL to add “M.D.” to the back of his jersey. His request was denied, which was absurd.

During the COVID-19 pandemic in 2020, shortly after winning a Super Bowl with the Chiefs, Duvernay-Tardiff opted out of the season. He left the team to work at a long-term care facility in Montreal.

After returning in 2021, Duvernay-Tardif was traded to the Jets and started seven of eight games at right guard. But he is currently hitting pause.

The 31-year-old offensive lineman announced in June that he was beginning a residency program at a Montreal-area hospital this month. Duvernay-Tardiff plans to reevaluate his football career later this summer.

“I’m going to prioritize medicine … and we’ll see in September if there’s a fit,” Duvernay-Tardif said to ESPN. “After eight years in the NFL, and I don’t want to sound pretentious by saying this, but I think I’ve earned the right to do what’s best for me and not just for football and kind of bet on myself a little bit.

“I’m really comfortable with the risk, and I’m pretty confident there’s going to be an offer on the table in September if I want it. And if I want it I’ll take it. If medicine is going well and I feel like I’ve got to be out there in front of 80,000 people to play the sport I love, well, I’ll go, but I think I want it to be more on my terms.”

Duvernay-Tardif’s decision has opened up a unique avenue for him to do both. He was a third-round pick in the 2014 CFL Draft by the Calgary Stampeders and the team has owned his rights ever since.

On Thursday evening, the Alouettes announced that they had acquired the rights to Duvernay-Tardif.

That means that if he ever elects to play in the CFL, he will be a member of the Montreal organization.

We have just acquired the rights to offensive lineman Laurent Duvernay-Tardif! If he plays in the CFL, he’ll be doing so in his own backyard! 👉https://t.co/6zeMGO75xL pic.twitter.com/Vxqs8Q7f5P

In an effort to lure Duvernay-Tardif into playing for their team as he continues his medical residency in the same city, the team’s general manager made a promise to fulfill the request he had denied by the NFL.

“We are happy to have proceeded with this transaction,” Maciocia said via 3DownNation.com. “Laurent is a football icon in Montreal and Quebec. We can only be winners in this transaction because even if Laurent never wears an Alouettes uniform, he will be able to openly support his hometown team without feeling any remorse. We wish him the best success with his football career moving forward, and are satisfied knowing that if he does play in Canada, he will do so in a city and a stadium that he knows very well. He would also finally be able to wear the letters M.D. on the back of his jersey like he has been wanting to do.”

It is unclear as to what Duvernay-Tardif thinks of the offer. It certainly makes a return to the gridiron in the Canadian Football League more enticing, but it might not be enough to get him back on the field. He said that he will reevaluate his future in September, and a football career in Montreal is now on the table.