College Football Lock Of The Week: Tulane vs. Memphis 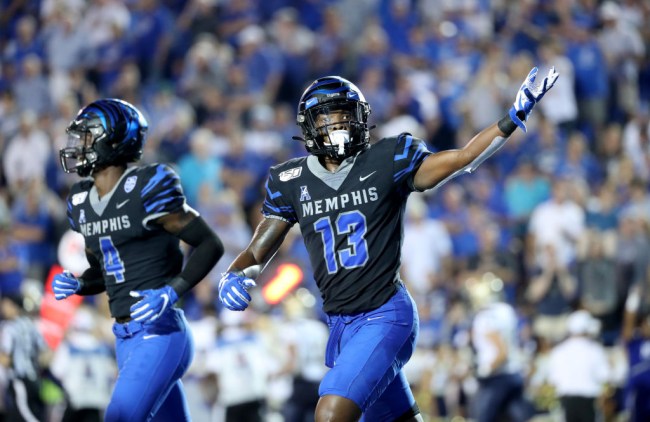 There are plenty of games each and every week on the college football slate that jump out at you making it that much harder to zero in on one game each Saturday. In this weekly series, we’ll circle one game, break down the matchup and lay out the evidence as to why this is the lock of the week.

Last week we circled the biggest game on the schedule, Florida vs. LSU, and unfortunately went with Florida +12.5 and lost. This week though we’re going back to Memphis like we did two weeks ago in a win.

Memphis is coming off of its first loss of the year last week at Temple and Tulane is coming into Saturday on a four-game winning streak, but there’s plenty of reasons to be on the Tigers this week despite them giving up 4.5 points.

It may sound stereotypical to say, but Memphis is going to enter this game angry after its 30-28 loss last weekend at Temple. While it’s just the midway point of the season, this is a massive game for Memphis in terms of getting back in the mix for the top spot in the American Athletic Conference as Tulane, Cincinnati, Temple and SMU are all unbeaten in the conference.

Going with the home team in an early-season must-win game with the line under five points seems like the right choice. The Tigers are also 2-1-0 against the spread at home this season and were 6-1-0 at home against the spread a season ago; the Liberty Bowl isn’t the easiest place in the country to go grab a win.

Tulane’s biggest win of the year came at home against Houston while the Green Wave’s only other notable game was a 24-6 loss at Auburn; their weaker schedule has inflated their season numbers dramatically. Memphis has already beaten an Ole Miss team at home, knocked off Navy by 12 and beat a not terrible Louisiana-Monroe team by 19 on the road.

Memphis and Tulane enter the game with the No. 1 and No. 2 passing defenses, respectively, in the conference which turns the focus to the run game. Tulane has a strong run-game of its own, but again the numbers are inflated thanks to a weak schedule; they ran for 350 yards against a very bad Florida International team in Week 2 and for another 300 yards against FCS side Montana.

The difference-maker on Saturday will be Memphis’ freshman running back Kenneth Gainwell who has run for at least 100 yards in each of the last four games including a 205 yard game against Louisiana-Monroe. He’s averaging 7.6 yards per carry and is the type of running back Tulane hasn’t seen this year as he has the ability to take it to the house any given play.

When it comes to the quarterbacks, Memphis’ Brady White has been consistent all season with a 69.9% completion percentage to go with 13 touchdowns compared to just four picks. Justin McMillan on the other side is more of a run-first quarterback completing just 58.3% of his passes and has thrown for over 200 yards only twice this year.

Saturday’s contest will likely be a tight one, but give me the Tigers by at least a touchdown. They’ll be fired up for this one with a bad taste in their mouth from last week and revenge will be in the air as Memphis lost at Tulane a year ago.