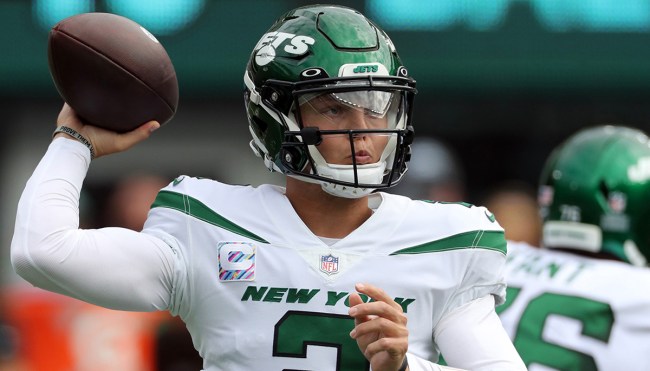 Over the past few decades, the Cleveland Browns have done seemingly everything in their power to cement their reputation as the NFL franchise where quarterbacks go to die thanks to the revolving door of promising players who’ve seen their careers end up on life support after earning the starting job.

However, the Jets have done what they can to compete in that race to the bottom since the fairly short-lived Mark Sanchez Era came to an end in 2012. The team has started a dozen different QBs under center over the past decade, and most of them have done what was seemingly unthinkable upon his departure: making the man whose career is largely defined by The Butt Fumble look like a generational talent by comparison.

The abysmal 2-14 record New York posted during the 2020 season was enough to earn them the right to draft a glimmer of hope in the form of Zach Wilson, who was scooped up with the second pick in the draft the following year.

The Jets didn’t fare much better during Wilson’s rookie season, but he did show some flashes of promises over the course of his inaugural campaign. He also managed to turn more than a few heads by bulking up over the course of the offseason and headed to training camp surrounded by a fair amount of hype (in addition to some very salacious rumors).

Only time will tell if Wilson will be able to channel his inner Joe Burrow in his second season with the Jets by finally reversing the fortunes of a franchise in desperate need of a savior. However, there are more than a few people who seem to think he has the potential to do exactly that—including Chad Johnson.

The Wide Receiver Formerly Known As Ochocinco addressed Wilson’s development while chatting with Sports Illustrated earlier this week, and it’s safe to say he has faith in his ability to step up this year based on the QB he compared him to while discussing his upside:

“Zach is extremely good. He has the ‘it’ factor—very Patrick Mahomes-ish.

I’m not saying he’s Patrick Mahomes, but you watch his mechanics, his throwing motion, the way he moves, he’s very Patrick Mahomes-ish. So I became a fan. …

Zach Wilson is gonna flourish; he’s gonna flourish in New York. It’s all about [Robert] Saleh … getting the right pieces around him. He and Elijah Moore, this year, they gonna create magic.”

It’s worth noting Johnson isn’t the only person who’s compared Wilson to Mahomes, as noted football clairvoyant Tony Romo previously suggested the BYU product was only a few years away from ascending to the level where the Chiefs superstar currently resides.