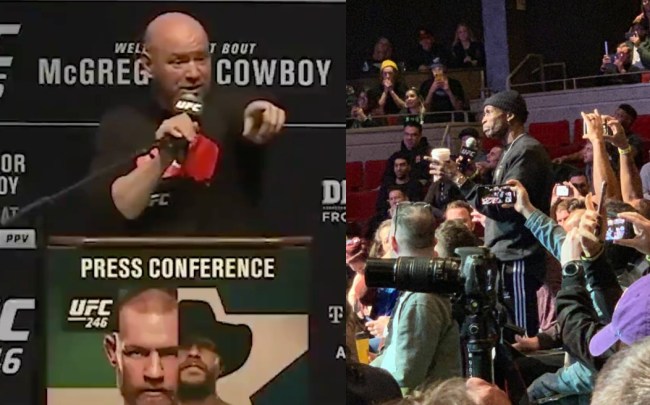 Earlier this week, news broke that Chad “Ochocinco” Johnson is currently trying out for the XFL as a kick – a job that outspoke former NFL veteran was born to have. In the meantime, Ochocinco can add another position his resume: UFC beat reporter.

Dana White called on Ochocinco to the surprise of the whole room and online audiences at the end of Wednesday’s UFC 246 press conference with Conor McGregor and Cowboy Cerrone.

Credentialed by Bleacher Report, Ocho had a question for McGregor and Cowboy that’s on a lot of people’s minds at the moment: Who should he bet on?

Retired NFL star @ochocinco uses his mic time at the #UFC246 presser to get betting advice from @TheNotoriousMMA 😅 pic.twitter.com/wp6lDmK8HL

I was actually sitting next to a Russian language sports reporter during the press conference, who quickly asked who Chad Ochocinco is and why he had such a huge applause at Conor McGregor / Cowboy’s press conference.

I think I nailed it, but the Russian language sports reporter’s look told me otherwise.

Welcome to the thrilling world of sports journalism, Ocho!

Reminder, here’s some of our UFC 246 coverage for your reading this week:

-What’s At Stake For Conor McGregor? Why He’s Fighting At UFC 246… And We’re Not Talking About The Purse

Brandon is a founding partner at BroBible and the site’s publisher. Tell him about your favorite cheeseburgers in Las Vegas while he’s there covering UFC 246 on Twitter.

this is my favorite quote from that very drama-free presser https://t.co/5UFJUWpIbn