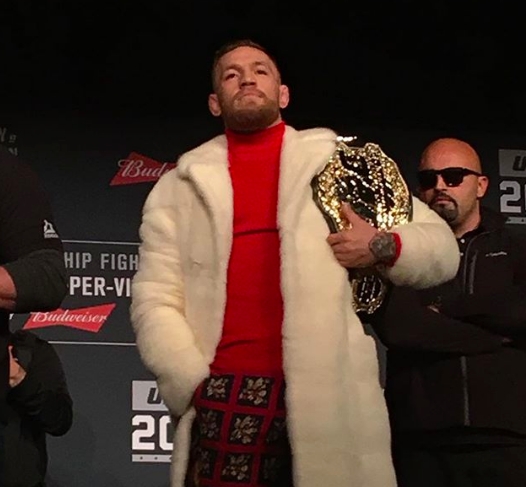 It’s UFC 246 fight week and “”The Notorious” Conor McGregor is returning to the Octagon for the first time in 15 months. UFC 246 is a big – no, huge – deal and every fight fan should be excited for McGregor’s comeback.

A once-in-a-generation talent and showman, McGregor is an international phenom who took over mixed martial arts and combat sports with his wild style and penchant for luxury. And while he’s become a bit of a walking tragic meme of late, making headlines for all the wrong reasons, Conor McGregor sure can fight. Seriously, the dude’s got game, not to mention a left hand that’s been blessed with natural power and pinpoint precision.

With McGregor returning to the Octagon to face Donald “Cowboy” Cerrone in the UFC 246 PPV main event on ESPN+, it’s time to take a look back at these great moments in Conor’s UFC career.

Having already established the stakes for McGregor at UFC 246 and examined his physical transformation in this move up to welterweight for the Cerrone fight, we’ve also determined that McGregor is healthy and motivated, but should be careful when sharing a PPV main card with Holly Holm.

So, now it’s time to relive the glory days, and remember that before he became an international tabloid sensation and before his brief dalliance with boxing Floyd Mayweather, Conor McGregor was known for some amazing knockouts.

Sure, it may have been a fight for the interim featherweight title, but McGregor’s bout against Chad Mendes is the perfect place to start. It was UFC 189, international fight week 2015, and McGregor was supposed to fight Jose Aldo for the real belt.

With Aldo pulling out of the fight last minute, McGregor welcomed all comers, eventually taking on Chad Mendes on short notice … and on a heavily compromised knee.

Having never faced an elite wrestler in his run up to the title shot, many wondered if McGregor could stuff Mendes’ well-timed takedown attempts. Turns out he couldn’t, and after doing some damage to Mendes’ body early in the round, McGregor spent the majority of the fight on his back, with Mendes in top position.

Would this be how McGregor’s win streak would end? Outwrestled and outpointed in a slow and boring judges’ decision?

Instead, McGregor regained his form in the second round and tagged Mendes with that left, sending the Team Alpha Male featherweight to the canvas.

From there it was a wrap, and Conor McGregor claimed his first UFC title.

With the interim featherweight title in his clutches, McGregor finally had his chance to unify the belts against then-champion Jose Aldo. It was a major coming out party for McGregor, who used the bad blood angle to harangue Aldo on their world tour, building anticipation that led to a reported 1-million+ Pay Per View buys.

Sitting cageside for this fight (and all the others being written about here), I can attest that the UFC 194 main event in December 2015 was one of the most unbelievable moments in UFC history because, well, who knocks out Jose Aldo in 13 seconds? And who literally calls the exact shot that will end the fight? Conor McGregor. That’s who. Besides, by this point, his “Mystic Mac” persona was in full swing, so the prophecy wasn’t that much of a surprise.

Anyway, back to the fight, the MGM Grand Garden Arena was packed with a UFC record crowd (both in terms of attendance and gate for that particular venue), full of crazy Irish fans, and plenty of American Conor fanboys posing as faux-Irish, guzzling Guinness, etc.

It was a tremendous scene to witness McGregor pick his shot. And just moments later, while talking with Joe Rogan in the Octagon, McGregor rattled off his infamous “timing beats speed. Precision beats power” line. The statement was as accurate as the punch that flatlined Aldo.

Just three months after McGregor’s notorious KO of Aldo, Conor was submitted by Nate Diaz via rear-naked choke in the second round of their UFC 196 PPV main event.

It was a bummer of a loss for McGregor, who, prior to the defeat, had won his first seven bouts inside the Octagon. But it was one hell of a fight, for as long as it lasted, with McGregor looking sharp and strong in the first round.

Diaz was a late replacement, the fight sold a (reported) astronomical number of PPVs, and McGregor was a good sport, handling defeat like a champ, so the loss didn’t affect his drawing power too much. And anyway, there would be a rematch …

In August 2016, at UFC 202, Conor McGregor and Nate Diaz resumed their rivalry, this time at the T-Mobile arena (site of the UFC 246 PPV main card on ESPN+), and aside from selling something like 1.65-million (estimated) Pay Per Views, a UFC record at the time, McGregor and Diaz delivered the Fight of the Year, absolutely battering each other for 25 minutes.

It was a phenomenal fight.

The only bout on this list to go the distance, this was a huge moment in McGregor’s career. He came back from defeat, he won a contest at 170 pounds, and he went 25 minutes for the first time in his career. He also relied on tactics and game planning more than his god-given power, which proved McGregor’s fight IQ, and ability to dish out leg kicks.

This fight remains one of the best in UFC history.

The Double Champ Does Whatever He Wants

Following UFC 202, McGregor made the quick turnaround to deliver one of the greatest championship performances in UFC history.

Needing less than two rounds to seal the deal, McGregor was perfect at UFC 205. If it was baseball, he would’ve batted a thousand that night, with four grand slams, including the game winner.

Knocking Alvarez down four times, including the knockout shot, McGregor looked cool and calm, and slick and catlike, in front of the sold out crowd. He did everything right that night, and fortunately, millions more watched the performance on Pay Per View.

Following the bout, McGregor hoisted a UFC title on each shoulder and paraded around the Octagon as the UFC’s first simultaneous two-division champ, or champ-champ for those in the know.

It remains the last time he won a professional MMA bout.

Notorious at the Mic

In addition to great lines like “we’re not here just to take part, we’re here to take over” and “winners focus on winning. Losers focus on winners,” Conor McGregor is one hell of a smooth talker on the microphone.

Sure, he has the fighting skills to pay the bills, but he has the delivery, timing, and wit that can take a great fighter and turn them into an international icon.

So rather than dive into any more of McGregor’s in cage highlights, enjoy this clip show of “The Notorious” at the mic. It’s easily worth a few laughs.