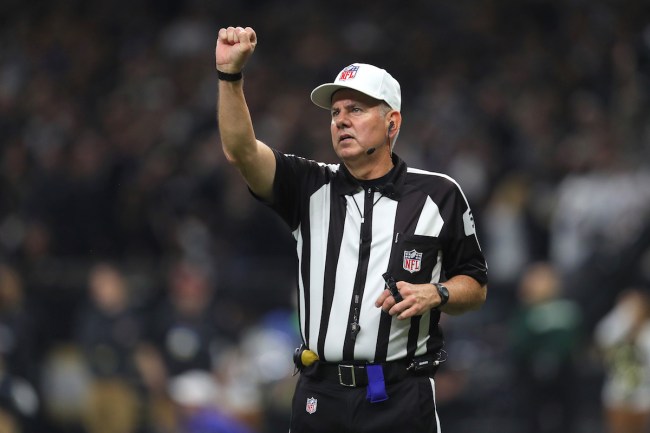 On Sunday night, NFL fans were treated to a conference championship Sunday for the ages featuring two overtime matchups between the four teams battling for the chance to play in Super Bowl LIII in a couple of weeks.

When the dust finally settled, the Rams earned the right to represent the NFC and the Chiefs crushed the spirits of Patriots haters around the country by letting Tom Brady do Tom Brady things as New England clinched yet another AFC title.

However, the Super Bowl could have looked a whole lot different if it wasn’t for the efforts (or lack thereof) of the officiating teams assigned to each game, as they both played a pivotal role in the final outcome.

With the clock ticking down in the fourth quarter, the Saints looked like they were going to seal the game before they got screwed harder than Bret Hart in Montreal when no flag was thrown on the most blatant pass interference penalty you’ll ever see.

However, that was far from the only play of the night that highlighted the ineptitude of the referees. The Chiefs also fell victim to a huge roughing the passer call on Tom Brady during a key fourth-quarter drive that resulted in a touchdown to put the Pats in front.

This brutally violent act by the Chiefs’ Chris Jones on Tom Brady drew a roughing the passer penalty. There’s simply no room in the sport for such gruesome violence. Please do not allow small children to watch this video. #NEvsKC pic.twitter.com/WlHo0ICbM1

It wasn’t as egregious as the no-call in the other game but it was especially questionable when you realize a defender did the exact same thing to Patrick Mahomes earlier in the game and wasn’t flagged.

Flowers gets pressure on Mahomes, J-MAC gets the PBU on 3rd down! pic.twitter.com/gNeYTeONWI

Roger Goodell could theoretically reverse the outcome of the NFC championship but the only recourse Saints supporters will realistically have is (rightfully) bitching about the blown call until the end of time.

I’m normally one of those guys who says you can’t blame a loss on a single call when you had other chances to win but Sunday’s games made it very clear that something needs to be done about the NFL’s penalty problem.

The answer? More flags— specifically of the challenge variety.

Two years ago, the NFL thought about allowing coaches to challenge penalties but owners neglected to vote to approve the change. However, it looks like it’s time to reconsider.

When you take into account the technology we have at hand, it’s pretty absurd that the human element still plays such a major role in how things play out over the course of a game.

The fact that the NFL allows replays in the first place shows they acknowledge the league’s officials aren’t always right, so you kind of have to wonder why refs are suddenly all-knowing gods as far as penalties are concerned.

I assume the biggest argument against this change would be the potential impact it could have on the pace of play, which is a somewhat valid concern.

With that said, I’m not exactly a huge fan of sitting around for five minutes as Tony Romo goes “Ehhhhhhhhhhh” every time he watches a different angle in slow motion but I think most people would be willing to sacrifice a little more time for the correct outcome.

So what steps should the NFL take from here? The first one is obvious: teams should be allowed to throw the challenge flag if they disagree with a pass interference call (or no-call).

There would be some kinks to work out— like how things would be handled in the final two minutes (when challenges are initiated by the officials)— but if you’re going to experiment, that’s the place to start.

It’s not as high of a priority, but the league also needs to take a look at roughing the passer penalties. This one is trickier because no one really seems to know what constitutes roughing these days so it’d be dumb to stop the game whenever a coach is angry someone touched his quarterback.

However, I’d propose teams should be allowed to counter a flag with one of their own if a phantom hit to the helmet nets their opponent 15 yards.

Could you argue allowing teams to challenge penalties and no-calls is a slippery slope?  Of course; the last thing I want is to live in a world where we’re reviewing holds and false starts.

However, Sunday made it very clear that something needs to change and reevaluating pass interference reviews is the place to start.