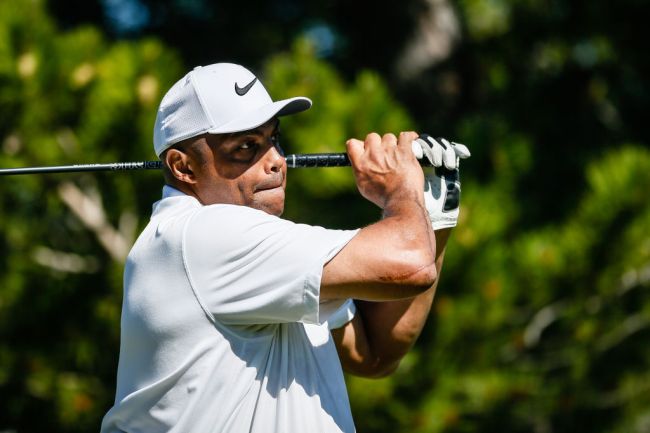 Charles Barkley has long been the butt of the joke for his absolutely terrible golf swing. The Round Mound of Rebound used to step up to the tee box and take one of the worst golf swings that you will ever see. There was absolutely no fluidity and the motion was incredibly painful to watch.

Barkley’s swing got slightly better as the years went on and he was able to eliminate one of the incredibly awkward stop-start movements. He would take a complete, slow backswing and then come forward, pause at about a 90-degree angle, swivel his hips and swing through the ball. It was still herky-jerky and really “just turrible,” as he might say.

Charles Barkley too saucy with that golf swing 🔥🔥 pic.twitter.com/POuIFrAI4f

Ever since then, he has been getting progressively better at the game, got rid of the yips, and his swing no longer induces vomiting on the spot. He showed off his best looking swing late last year when he played in “The Match” with Phil Mickelson, Steph Curry and Peyton Manning.

Looks like Charles Barkley has been working on his golf swing 👏🏼 pic.twitter.com/0gKNxmJf2b

Charles Barkley got himself a golf swing!!! pic.twitter.com/7sQkPssxRl

After a long journey of improvement, Barkley seems to have found his groove. The 58-year-old competed in Wednesday’s Region Tradition Pro-Am alongside a star-studded cast of Alabama figures. As he stepped up to the first tee, the announcer took a jab at Sir Charles before he SMACKED one down the fairway and shut him up. Former Auburn running back (an under-represented title for sake of the tournament) Bo Jackson ran over and gave him a celebratory hug.

Things stayed consistent as the day went on and Barkley kept his ball straight with a pretty good looking swing.

BREAKING: Charles Barkley has fixed his golf swing and is now striping it ⛳️ pic.twitter.com/xSWFdljUpc

It was a rainy day in north Alabama. Prior to the event getting started, Barkley had some thoughts on the local weathermen.

“Tell the weatherman they suck.” 😂

Rain in Alabama was supposed to stop yesterday and Charles Barkley weighs in. pic.twitter.com/Gxvw8q0MX7

Regions Pro-Am is about to tee off…..which group would you want mic'd up? pic.twitter.com/iaYiwy8ZzO

No matter who won on the scorecard, Barkley was the event’s biggest winner. He stepped up there, with everyone doubting him, and striped one.