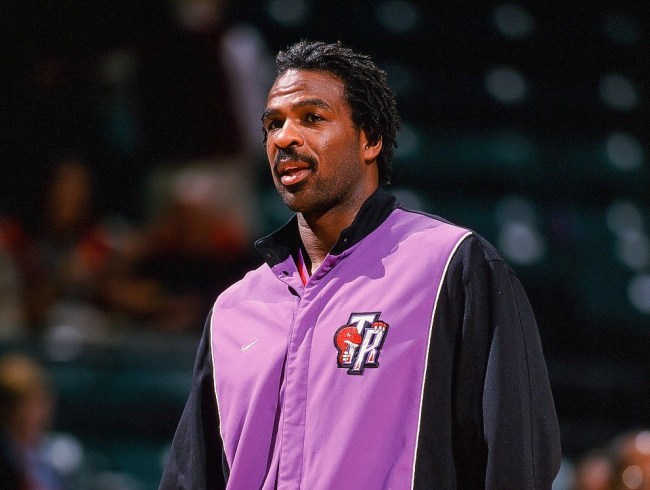 We all know that former NBA player Charles Oakley has a short fuse, with legendary stories circulating about how he pretty much made a living on the basketball court as an enforcing bully, protecting the likes of guys like Michael Jordan and Patrick Ewing from being pushed around by opposing players. Hell, Oak even got into with Knicks owner James Dolan during a game a few years ago, with their beef still extending to today because of that incident.

Bottom line: If Charles Oakley were eyeing you down, you’re going to be shaking in your boots a little bit; because the dude isn’t taking shit from anybody.

While most of Oakley’s encounters came with opponents during his playing career, his former Toronto Raptors teammate, Tracy McGrady, recently recounted a story about how the former forward even picked on guys in his own locker room. In fact, in at least one incident, he straight up punked one out.

According to McGrady, who joined Matt Barnes and Stephen Jackson on the All The Smoke podcast, during a team flight to Sacramento once, Oakley and a few other guys were slamming whiskey to pass the time. Considering they were coming from Toronto — which means it was like a 7-hour trek — the boozing got a little out of control. So much so that Charles Oakley dumped the last bottle of booze on a teammate’s head because he was so pissed off that it was originally being hid from him. Take a look below at T-Mac’s story.

“I ain’t going to say my man’s name. I don’t want to put him out there like that.

“We’re flying from Toronto to Sacramento. Bro, this is a long-ass flight, right? These boys got the big bottles of Jack Daniels.

“The whole plane ride, they’re drinking like crazy. I’m talking about, they’ve got a bunch of bottles. We land in Sacramento, and Oak is looking for the last bottle. My man don’t even want to drink no more. So, he hid the bottle under his seat.

“Dog, Oak was looking around him, grabbed the bottle.

“Mind you, the dude is from Sacramento. Clean suit. He going home to see the fam.

“‘Oh, you trying to hide the bottle. Oh, you don’t want to drink no more? Alright, motherf—er, you’re going to wear this.’ And drenched it on him. The whole bottle, bro.

“Bro, the whole bottle on him. Buddy sitting there like mad as hell, like ready to get up. Nah, chill, dog. Take that. We’re telling him, ‘You’ve got to eat, dog.'”

“But I love that cat to death, though, because he’s ride or die for you.”

If there were any doubts about whether or not fucking with Charles Oakley was ever a good idea, this story from McGrady pretty much proves he’s a different breed of wild. I mean, shit, dumping a whole bottle of whiskey on a teammate just because he was hiding it? There’s crazy and then there’s whatever this is.

What makes the whole story even better is that Tracy McGrady was still just an innocent teenager watching this all go down. It might not have been his own “welcome to the NBA” moment, but, shit, it sure as hell showed that he wasn’t riding around on buses with other teenagers going to AAU tourneys.

Oakley’s always been an absolute savage; and this story from T-Mac only proves it even more.