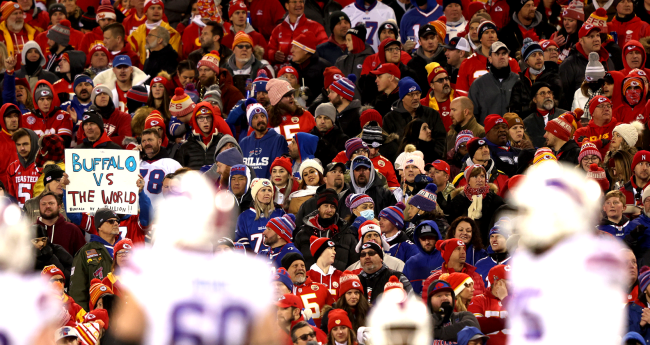 Kansas City Chiefs fans took a page out of the Bills Mafia playbook this week after their team defeated Buffalo in one of the best playoff games ever.

Over the past several years, Buffalo Bills fans have donated over two million dollars to various causes associated with their team and their opponents.

The Bills Mafia has donated thousands of dollars to charities supported by Andy Dalton, Lamar Jackson, and Tre’Davious White, as well as over a million dollars for Buffalo’s Oishei Children’s Hospital in memory of Josh Allen’s grandmother who passed away in 2021.

They even donated a few thousand dollars to the Buffalo-based Visually Impaired Advancement rehabilitation center in honor of some referees they felt have bad eyesight after some calls not going their way in a 2021 game.

Who will feed the kids this weekend? You are! #BillsMafia #ChiefsBillsbackpackchallenge pic.twitter.com/XjvqonyTWQ

This week, Kansas City Chiefs fans decided to follow in the Bills Mafia’s footsteps and donate $13 each to Josh Allen’s charity named after his grandmother, Patricia Allen, in tribute to the 13 seconds it took for their team to tie Sunday’s playoff game.

Chiefs fan Brett Fitzgerald was the one who got the ball rolling after thinking about getting some people to donate $13 to Patrick Mahomes’ foundation.

When he heard about all the charitable donations the Bill Mafia have been making, he decided to change course.

Much respect to #BillsMafia from #ChiefsKingdom pic.twitter.com/FfxwQ1164T

“After about an hour or so, after it started blowing up, I said, ’17 would’ve been more appropriate,’ but the way I see it is, it’s a way for Chiefs fans to celebrate that we won, and how, and at the same time, giving much due respect to Josh Allen, the Bills and Bills Mafia,” Fitzgerald told WIVB News.

“What’s been really cool for us is seeing Buffalo and this hospital put on a national stage, because it should be,” Andrew Bennett, vice president of the foundation, said about the Chiefs fans’ generosity. “The work that’s done here every day; the care providers that we have; the experts that we have; and just what a wonderful place this is for kids and families in this community.”

An incredible $178,000 from over 9800 donors has been donated in just over 24 hours from #ChiefsKingdom Thank you all! These donations help the ongoing need and ensure our team has the tools, training and programs to care for the kids in WNY ❤️ pic.twitter.com/wWXvDXxjXF

As of Wednesday morning, over $184,000 had been donated to the hospital by Chiefs fans, all thanks to one guy’s great idea.

“The credit goes to Bills Mafia,” said Fitzgerald. “I’m just some guy who put something on the internet.”