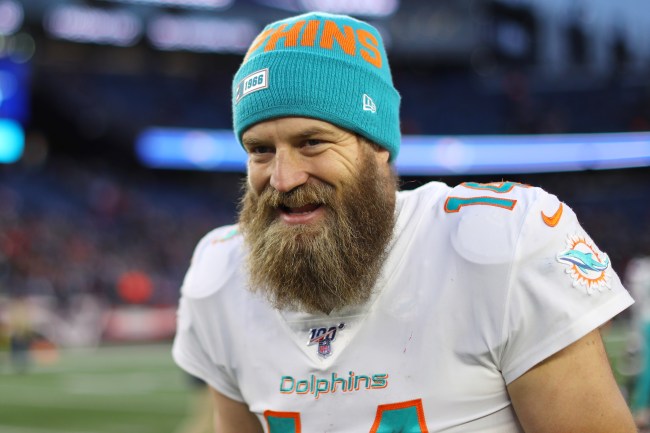 On Sunday afternoon Miami Dolphins QB Ryan Fitzpatrick put the team on his back and shocked the NFL world by beating the New England Patriots and costing them a first-round bye.

FITZ LEFT THEM IN THE DUST 😱😱 @MiamiDolphins pic.twitter.com/Q08ndCHTUh

Ryan Fitzpatrick to Mike Gesicki and the #Dolphins take the lead with 24 seconds remaining.

Chiefs fans now want to show Fitzpatrick their appreciation for giving their team a first-round bye by letting him bang the drum at Arrowhead stadium during the playoffs.

Let’s show our gratitude with the greatest honor to be given at Arrowhead Stadium. Let the man bang the drum!

As of today over 20k people have signed the petition.

Not only are Chiefs fans appreciative of Fitzpatrick beating the Patriots but it QB Patrick Mahomes also showed the Dolphins QB on Sunday.

"That's Fitzmagic though, I love watching him play. He's a great player."

– Patrick Mahomes when asked about Ryan Fitzpatrick, whose win over the Patriots clinched a first-round bye for the @Chiefs pic.twitter.com/gg2jkcwDEo

It would be pretty amazing if the Chiefs were able to bring out Fitzpatrick to bang the drum if the team ended up facing the Patriots in the playoffs.