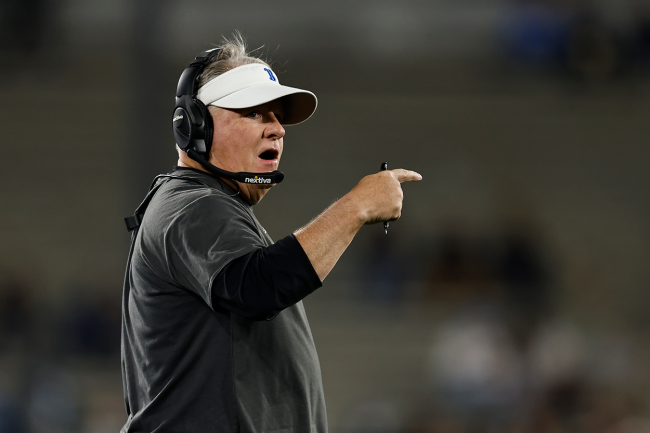 This year’s college football coaching carousel is one of the craziest in a long time. Now that the dust has settled at many top programs around the country, one big-name opening remains at the University of Oregon.

Among the names that have floated around, Matt Campbell, Chris Peterson, Bryan Harsin, Dave Aranda, Tom Herman, Kalani Sitake, Justin Wilcox and Chip Kelly appear to be the targets. In addition to the large pool, the Ducks have reportedly talked about one of the most insane ideas possible.

However, amidst all of the speculation, Kelly seems to be the top guy as of right now. Oregon requested permission to interview their former head coach who is now at UCLA and the internet has exploded around the rumors.

Kelly, who won three Pac-12 Championships as the head coach of the Ducks from 2009 to 2012, left for the NFL in 2013. Since then, he has coached the Eagles and 49ers before taking the same role with the Bruins.

And now, apparently, he might be headed back to Eugene.

As a result of the rumors, UCLA fans are freaking out and noticed something interesting about a recent recruiting trip.

Kelly visited four-star defensive lineman Anthony Lucas at his home in Scottsdale, Arizona earlier this week. In a photo that Lucas posted from the visit, Kelly is conspicuously lacking a UCLA logo on his polo shirt.

Thank you to coach Chip Kelly for stopping by, it was a pleasure having you over @UCLAFootball #GoBruins pic.twitter.com/hpWNWqQMig

Obviously, trying to connect the dots here is a stretch. However, it is a legitimate point to be made.

Rarely, if ever, does a coach not rep the school that he works for on the recruiting trail. Is Kelly afraid to commit to his current school as something is in the works with his former school?

Stay tuned to find out.