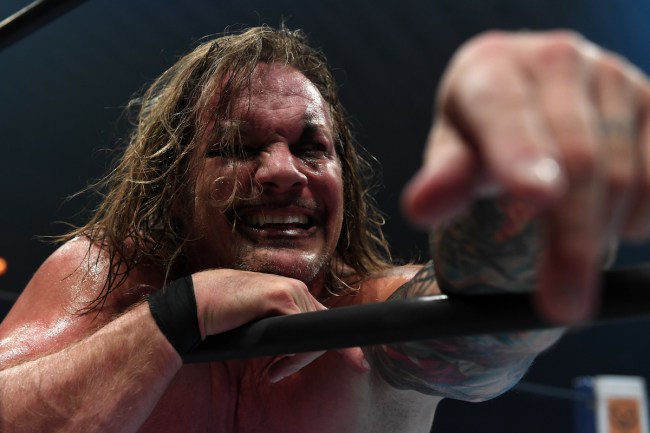 Professional wrestlers have a difficult time getting heat these days.

Sure, some performers fans genuinely dislike, but the ability to get a crowd so angry that little kids are throwing haymakers is rare.

Chris Jericho has the ability to piss off a crowd and make little kids hate him, but one time a fan went over the line, but it was all Hulk Hogan’s fault.

In a recent interview on the Hollywood Raw podcast, the now-AEW star Jericho relived the events from a house show back in 2002. Jericho discussed his favorite fan signs over the years and remembered a young kid with a sign that read “Hulk Hogan is a Jedi.”

“In the summer of 2002, I was working with Hulk Hogan. It was kind of his last run in the WWE, and we were doing all the live events non-televised.

He was the good guy, I was the bad guy, and we had so much fun. People just loved Hogan and people just hated me.

I remember one kid in the crowd had a sign that said Hulk Hogan is a Jedi. It was right around when the second of the new Star Wars movies came out, maybe Attack of the Clones.

That just really bothered me. I remember I cut a whole promo on this kid who wrote the sign that Hulk Hogan was a Jedi, and how dare you compare the brilliance of a Jedi with the dumpster fire that’s Hulk Hogan.”

Later in the match, Jericho and Hogan ended up brawling on the outside of the ring. The fight ended up near the young fan, and Hogan used the opportunity to get the kid involved in the fracas.

“The kid who wrote it – Hogan held my arms behind me and goes, ‘Hit him, kid.’ And I’m like, okay, what’s this kid gonna do?

This kid – he’s probably eight years old – balls up his fist and punched me in the face as hard as he could, and it really hurt.

If you were such a Jedi, why don’t you use mind control and tell him not to punch me in the face, Mr. Jedi?”

Speaking of people who want to punch Jericho in the face, there’s a former UFC champion begging for it to happen.