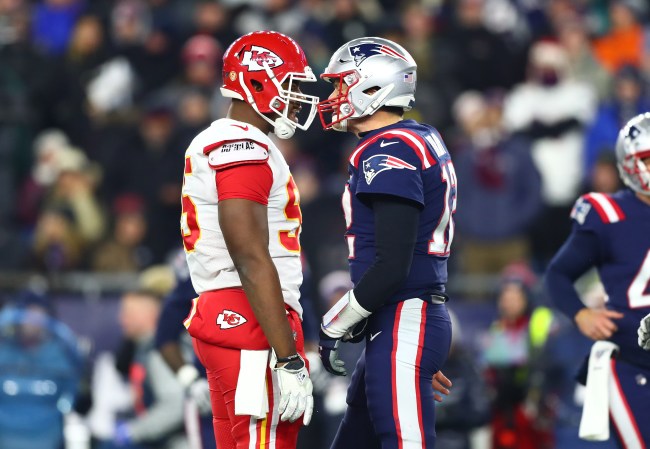 Chris Jones of the Kansas City Chiefs is a big man, so he’s probably not somebody anyone should openly mess with. Then again, Tom Brady isn’t just anybody, as the New England Patriots quarterback is the definitive GOAT, earning six Super Bowl rings in nine appearances to the Big Game, in addition to holding a number of different NFL records. It’s an unlikely personal rivalry, but it’s one that is fun to hear about given their recent history.

Over the years, we’ve heard tons of great trash-talking stories — with ones involving Michael Jordan being some of the best — but don’t discount the shit Chris Jones and Tom Brady have said to one another since the Chiefs-Patriots rivalry has heated up. With both teams winning a Super Bowl in the past two years, it’ll be interesting to see which team holds the edge in the coming years. And, in terms of Jones and Brady, it seems as if they’re just getting started when it comes to getting in one another’s head.

We learned that this week when the massive Chiefs defender went on the Pardon My Take podcast, revealing the A+ stuff he used to try and throw Brady off his game. Take a look below at some of the crap Jones was spitting in Tommy’s ear the last time the two met.

“You gotta understand — I talk a lot of shit on the field. That was the first time I’ve ever seen Tom Brady get mad at a defensive lineman, when I talked shit to him,” Jones said.

“That’s part of the game, man. I feel like especially quarterbacks … you know, quarterbacks and D-line, that’s two different types of class. So when you’re able to clash up, you talk your shit,” Jones explained. “You say how you feel to him. If he on the ground, you call him an old-ass motherfucker. Or, ‘Get your old ass up.’ [Or], ‘You need to fucking retire.’ So any time I’m able to say anything to a quarterback after I hit him – I don’t even have to hit you. I’ll just come to you and talk shit.”

Jones was asked if he used the you’re old/retire line on Brady.

“I mean, along those words. And Brady got up so fucking fast, that’s the quickest I’ve ever seen Brady move,” Jones said, while boasting that he became the rare player to get Brady to lose his cool.

“Brady is a good guy. He cussed me out, but I loved it. But that’s the first time I’ve ever seen Brady cuss a D-lineman out. So obviously I was doing something right,” Jones said.

Absolutely savage stuff from Chris Jones here, and awesome to hear his honesty about the mind games he used to try and throw Brady off his game. I’m sure the quarterback has heard similar stuff for years no matter the sport, and, never one to back down from a challenge, it’s cool to see he was throwing it back in Jones’ face, too.

With Tom Brady set to turn 43 years old later this year, he should expect this type of shit from every single opponent who faces him, so it’s not like he’s ill-prepared to throw some trash-talk back. Considering Chris Jones and his Chiefs got the best of the Pats the last time the two teams met, I’m sure telling this story is a little bit sweeter than it would’ve been had his team lost.