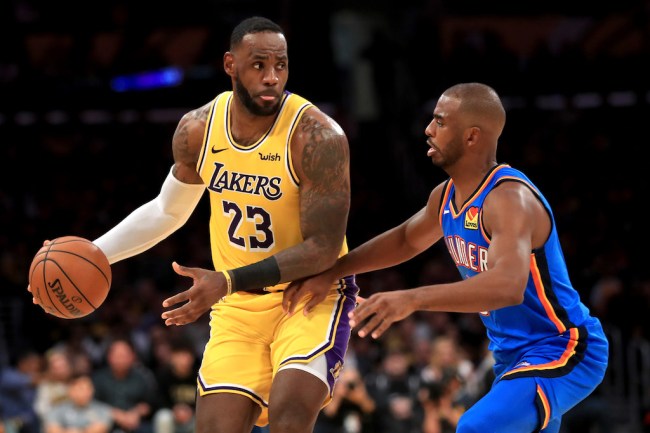 When all is said and done, Chris Paul will be in the Hall of Fame — even if he doesn’t end up winning that coveted championship that’s alluded him to this point in his NBA career. So it’s a little absurd to imagine the 10-time All-Star joining forces with his good buddy LeBron James on the Los Angeles Lakers, but there are some whispers from execs around the league that it’s bound to happen this offseason.

With the Lakers coming off a title from inside the NBA bubble, all eyes are on the front office, with basketball fans wondering how the team can improve and surround James and fellow superstar Anthony Davis with even more talent to try to defend their championship — presuming the latter re-ups with the team, which is expected. After all, LeBron’s not getting any younger, so L.A. knows they’ve got to squeeze as much juice out of that lemon as possible before his glory days are over. Would bringing in Chris Paul do the trick? One would imagine so, with the two players arguably being the best at their respective positions over the past 15 years.

One guy who believes it’s a near certainty that Paul joins the Lakers is ESPN analyst Kendrick Perkins, who recently talked about the topic on the Sedano and LZ show. According to Perk, he sees Chris Paul teaming up with James and Davis, and Rajon Rondo moving to the crosstown L.A. Clippers — which would only make that rivalry even more intense. Take a look below at what the former NBA player had to say.

We all know how great of friends LeBron James and Chris Paul are. Chris Paul has been on record this offseason saying that his destinations are the Lakers in L.A. or with New York. And I think he’s going to be a Laker. I’m telling you. I can see it happening right now, with him and Sam Presti possibly coming up with a buyout if they can’t come together and get a trade done. I’m like 85% sure Chris Paul will be a Laker next year.”

It’s important to remember that Perkins is strictly giving his personal opinion here and that it’s not a guarantee Chris Paul lands with the Lakers, but the guy is plugged in with various people around the league, so one would imagine he’s got a foundation to his belief. Plus, at this stage in Paul’s career, chasing a title only seems obvious — the dude’s 35 and wants to win to further cement his legacy.

Within the past week, there have been rumors about Paul landing in New York with the Knicks, so it’s officially the silly season as we head into the NBA Draft. However, the player’s current team, the OKC Thunder, will probably work with him to land at a destination he prefers — and the Knicks are far from being a title contender, so it wouldn’t appear the guard has interest in playing there.

LeBron James and Chris Paul are good buddies who have talked before about playing together. The stars seems to be aligning this offseason to make that happen, so none of us should be surprised if/when it happens, which would only strengthen the Lakers’ grip on a title defense next NBA season.