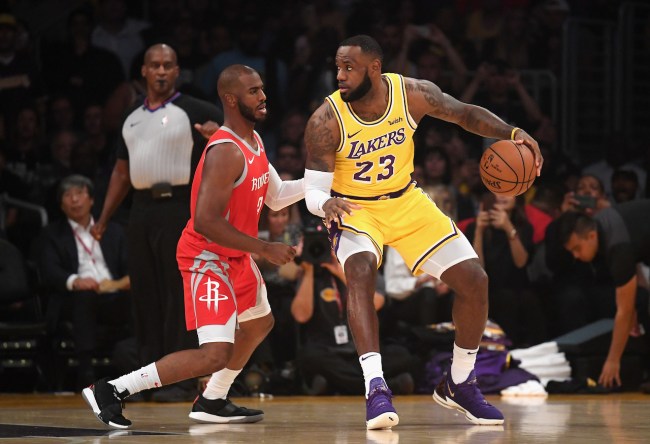 When it comes to influential athletes in the world, there isn’t anyone bigger than LeBron James, who can basically snap his fingers and get pretty much anything he wants. Now that “The King” has his fourth NBA title, though, will he get complacent and just try to ride out the last few years of his career after proving all of his haters wrong? Doubtful. In fact, some NBA execs think things could get even better for James and his Los Angeles Lakers.

According to a recent Bleacher Report article, which talked with anonymous NBA executives, LeBron James’ influence within the Lakers organization is so enormous that it could lead to the team acquiring Chris Paul this offseason. If that happens, look out, because, assuming Anthony Davis re-signs with the Lakers — pretty much a foregone conclusion based off of recent reports — the Purple & Gold could come back next season with an even more lethal lineup than the one that just won them a 17th NBA title.

It’s one of the worst-kept secrets in the league that LeBron is heavily involved in his agency’s maneuverings, and why NBA execs can easily see LeBron pushing the Lakers to trade for an old friend this offseason.

“Chris Paul would love to come back to L.A. I know it would be a dream come true for Chris,” an Eastern Conference executive said. “I know LeBron loves and trusts him and he would be a good fit.”

Paul would give the Lakers a third scorer and playmaking depth, especially if they retain Rajon Rondo. The challenge would be the two years, $85.6 million left on Paul’s contract (he can opt out of the final season but isn’t likely to, given the $44.2 million payday).

“It seems like a risk, but sometimes you need to [execute big moves] to make yourself even better,” the executive continued. “The [Golden State] Warriors will be better. The [Los Angeles] Clippers may be better. The [Denver] Nuggets aren’t going to get worse. Your competition is getting better. It worked [in Orlando] for the Lakers, but I don’t know if you have a normal regular season without the bubble if it does.”

“It’s a no-brainer to get a third scorer [and playmaker] like Chris. It’s a really valid and viable scenario,” he said. “Will it happen? I don’t know, but if I’m the Lakers [or] if I’m LeBron, that’s what I go for. They might be able to get a pick back from the Thunder, like [the Miami Heat’s 2021 previously acquired by Oklahoma City].”

Sheesh, I don’t even want to think about this happening, but, based off of the execs Bleacher Report spoke with, it doesn’t even seem like it’s all that far-fetched. In fact, from the front-office people quoted in the B/R piece, it honestly seems like the Lakers are more likely to get Chris Paul than not. That’s insane, and speaks volumes to the influence that LeBron James and his agent Rich Paul have over the entire Lakers organization.

It’s no secret James has been the de facto general manager on every single team’s he played on since about 2007 following his first trip to the NBA Finals. After getting embarrassed in that series with a meager cast around him — and, at the time, the clock ticking on his pending free agency — James was handed the keys to the franchise and had major influence over roster moves. Fast-forward to present time and with the four-time league MVP having his own sports agency, well, LeBron has even more power than he did before.

There are lots of questions surrounding the Lakers heading into this offseason, but, like every year, James often retools with players he thinks best fits his game to make a title run. It worked for him this season with a patchwork roster, and if one of his best buddies, Chris Paul, joins him on the Lakers, the trio of CP3, Anthony Davis and LeBron James will be nearly impossible to stop.