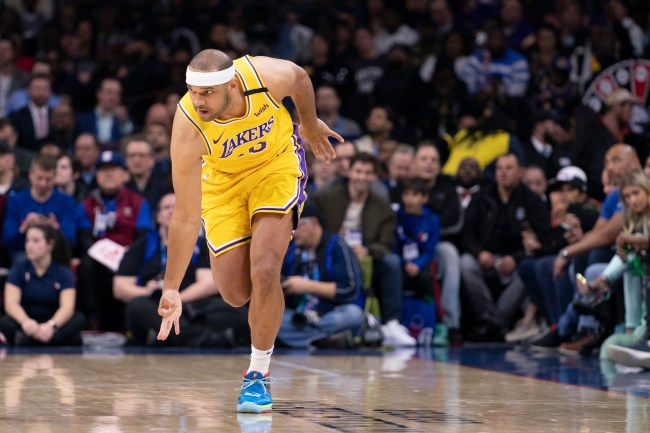 The wildest NBA season in history has ended, but Lakers scrub Jared Dudley still can’t help himself when it comes to talking crap; especially about the in-town rival Clippers. Now, the fact that this man has a championship on his resume, I have no need to slam the guy for being a “scrub,” but, damn, ol’ dude played a total of three minutes in the NBA Finals against the Miami Heat, so it’s not as if he really contributed a whole lot — on the floor, at least. Who knows? Maybe Dudley provided the almighty “veteran leadership” in the locker room that fans don’t see.

Even after Dudley got his title, he still wanted to let everyone know that, yes, he and his Lakers teammates found the Clippers’ epic playoff meltdown against the Denver Nuggets absolutely hilarious. You know, the one where the Clippers — who, despite what some of their superstars say, were championship-or-bust this season — blew that 3-1 lead. Yeah, that. We’re still talking about it. Well, at least Jared Dudley is.

Appearing on the Bill Simmons Podcast, the 13-year NBA veteran was straight up asked how he and his teammates reacted to the Clips’ collapse. Dudley, always the honest Abe, didn’t mince words, saying the entire Lakers locker room laughed after seeing it go down. Brutal.

“We were laughing. We were laughing, since, like, I can’t believe it. I thought they were gonna win Game 7. I didn’t think they were going to lose. Our whole mind was, we gotta beat the Clippers. We want the Clippers. They wanted us. There was the trash-talking that happened. Pat Bev ‘check ball’ during the pandemic, Playoff P talking about he the best, him and Kawhi, Kawhi with the commercials and the crown, we’re seeing all the billboards up here.

“So when we go to practice every day, there’s a Kawhi billboard. We see that billboard every single day. The world wants it, the world picking the Clippers… We were looking forward to that matchup. But you know what? It was just crazy. You see George hit the side of the backboard, Kawhi not having that. But those boys, they didn’t want to be in the bubble. They didn’t want to be there. I don’t blame them for certain times, but the world needed to see the Lakers and Clippers, and it’s unfortunate we didn’t get to see that.

This is such a passive aggressive reply from Dudley… and I love it. It’d be one thing to come from somebody like LeBron James or Anthony Davis. But Jared Dudley saying this? If you’re a Clippers player or fan, you really have to feel the knife twisting in your gut now, don’t you? It’s just a reminder that the Lakers are the big brother, while the Clips are the little brother who never gets what he wants.

The entire NBA season focused on the Lakers playing the Clippers in the postseason, with the narrative being simple: LeBron James was too old and it was time for a new kid on the block (Kawhi Leonard) to take his place atop the throne. Hell, people were even talking about Kawhi’s place in history had he won a title this season. His team shit the bed, didn’t show up for the pivotal Game 7 and now have all sorts of drama after firing head coach Doc Rivers a few weeks after the loss to Denver.

Scrub or not, I love Jared Dudley, because every single NBA fan did what he and his Lakers teammates did after seeing the Clippers eliminated. Yes, we all laughed hysterically — which, sadly, seems to be a theme when it comes to talking about L.A.’s “other” pro basketball team.