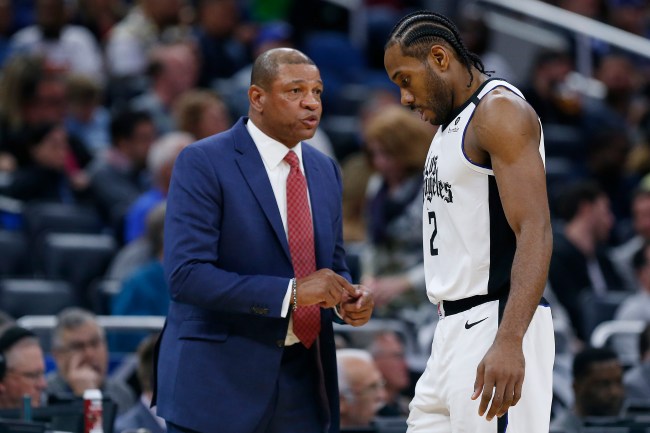 The Clippers firing Doc Rivers on Monday was a total shock to the basketball world, with the highly respected, and successful, head coach getting shown the exit after his squad shit the bed and blew a 3-1 series lead to the Denver Nuggets in the NBA Playoffs. But, as my best friend pointed out via text after it happened, Doc’s the only head coach in NBA history who’s blown multiple 3-1 series leads, so maybe he was actually overvalued after winning a championship with the Big 3 in Boston over a decade ago? That very well could be the case.

Still, the fact that Doc Rivers is now without a job is surprising, as there are less than a handful of coaches out there who have the resume he has. He (seemingly) knows how to manage superstars. He always seems to have his teams rank high defensively. He seems like a players’ coach. So what exactly went wrong with the Clippers then?

To help us answer that question, let’s turn our attention to ESPN hoops analyst Jay Williams, who didn’t mince words in his feeling about Rivers getting canned, even going as far as saying something smells “fishy,” while pointing out the fact that the team’s biggest star, Kawhi Leonard, has to be looked at as the culprit in the front office’s decision to fire Doc. Take a look at what Williams said Tuesday morning during the Keyshawn, JWill & Zubin podcast.

“It feels like I watched a coup happen.”@RealJayWilliams thinks the way Doc Rivers was ousted by the Clippers is fishy, and that it points back to Kawhi Leonard. #KJZ pic.twitter.com/JwIrmQqnWW

There’s a lot to digest there from Williams, but one of the interesting points is this: That he said he’s never known Clippers owner Steve Ballmer to make a knee-jerk reaction. And, in my personal opinion, the team firing Doc Rivers weeks after blowing the 3-1 series lead seems more like an influential decision than anything else. Almost as if, oh I don’t know, somebody was in his hear to fire Rivers. Maybe that somebody was Kawhi Leonard, or his inner circle — maybe the famed Uncle Dennis? — or somebody who knows Kawhi well. Maybe it wasn’t, and it was just because the coach reportedly lost his locker room. But the fact that Leonard forced his way out of San Antonio and turned his back on Hall of Fame coach Gregg Popovich at least shows us that the silent assassin at least has a cunning side to his personality.

Back to J-Will’s point about Ballmer; why didn’t the billionaire owner cut Rivers loose immediately after the loss to Denver? For anyone who knows anything about sports, that seems like the more standard thing to do, right? We’ve all heard about “Black Monday” for NFL coaches — where guys lose their jobs less than 24 hours after coaching a Week 17 contest — and it seems to be the norm for franchises who want to move on from a coach because, well, there’s no point in stringing things along any further. That didn’t happen with Rivers, though, and it might be because Ballmer didn’t actually want to can the only head coach he’s had since purchasing the franchise in 2014.

We all know that the NBA is a league made for superstars, and there’s only a handful of players bigger than Kawhi Leonard in his prime, so one would imagine a big decision like firing Doc Rivers had to be signed off by the three-time NBA champ. And, if you need more evidence that Leonard may have had his hand in the decision about Rivers, just look at what Ryen Russillo tweeted Monday about what he’s hearing about the move to cut ties with the head coach.

This surprised Doc. From what I’m told he thought he was ok. But this locker room was an even bigger mess than I think we realized. Kawhi has never had to be a vocal leader and PG doesn’t have the respect of his teammates.

Oh, and then there’s this: A feature from The Athletic written by Clippers reporter Jovan Buha that gives a behind-the-scenes look at the decision to fire Doc Rivers. It hints at what Russillo tweeted about Kawhi and George, but expands on it even further.

The organization ultimately determined that the locker room, as currently constructed, lacked the requisite leadership and mettle to be true a championship team. Players weren’t necessarily put in the best position to unlock a better version of themselves, either, with the team not always making appropriate or timely adjustments, league sources said.

Rivers, in the undeniably difficult position of juggling multiple egos and sensitive personalities, never struck the necessary balance in the locker room. It’s telling that, as of this writing, no Clipper player has publicly thanked or defended Rivers on social media after his departure.

So is Doc Rivers really the one to blame for the Clippers embarrassingly blowing that 3-1 series lead to the Nuggets? No, that’s on the players, who didn’t execute. More so, it’s on both Leonard and George, who combined for a lousy 24 points, 10 rebounds and 8 assists in Game 7 versus Denver. That’s pathetic for two superstars, especially in a win-or-go-home scenario.

Unfortunately, Rivers is the scapegoat in the Clippers failing to meet expectations during this dysfunctional NBA season. Pair that with the probability that Kawhi Leonard and/or Paul George just didn’t want to play for him anymore and, well, you see what the result is.