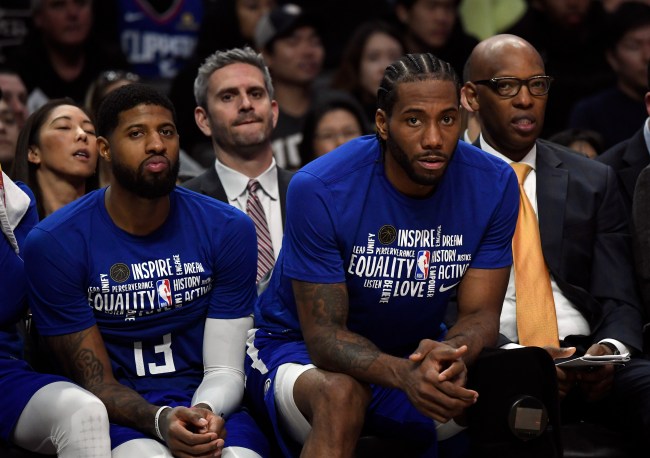 Kawhi Leonard’s first season with the Los Angeles Clippers ended a little bit too prematurely, with the championship-or-bust organization falling short in this weird NBA season by getting shocked in the second round against the Denver Nuggets. The series loss absolutely exposed the Clippers, who blew a 3-1 lead to a hungry Nuggets team that had no right winning the final three games on their way to the Conference Finals.

While the Clippers’ loss was unexpected — as many had predicted (and hoped) for a Western Conference Finals featuring Leonard’s squad versus LeBron James’ L.A. Lakers — it also seemed to bring out a fractured roster, with teammates allegedly rolling their eyes at another one of the team’s stars, Paul George, who underperformed in the postseason despite his self-indulging nickname “Playoff P.” It was a bad look internally, but that hate towards George seems to be shared externally as well.

That’s because Kawhi Leonard’s trainer, Clint Parks, fired off some recent tweets that totally trashed George as a sidekick to the three-time NBA champ. But Parks didn’t just stop with George, as he also shit all over Montrezl Harrell, too — who was named the league’s Sixth Man of the Year, but, like George, sort of shit the bed in the postseason — even saying he’d rather have Dwight Howard instead. Take a look at the tweets from Clint Parks below.

Yea wish they had him instead of that double agent Trezz https://t.co/rnddM1EXSA

Shit, guys, did Kawhi Leonard’s trainer really just say Paul George’s hoops IQ is basically trash and that Montrezl Harrell is a double agent who’s conspiring against his teammates? Yep, he sure did, and it’s definitely not something you want to see if you’re a Clippers fan who already knows the dysfunction going on within the organization after its latest playoff disappointment.

After seeing the tweets fired off from Parks, people on Twitter seemed to attack Kawhi, saying this type of crap exposes him as a poor leader and somebody who appears to talk shit to those in his inner circle, yet he stays quiet publicly.

I hope people are FINALLY opening their eyes to Kawahi. Whether it's his uncle festus or this clown; KaLoad Management drives this train. He pretends to be meek and innocent while they do the dirty work. Dwight, Yannis, it doesn't matter; they would STILL have no team leader.

Kawhi orchestrated this whole season. It’s his baby!!! Traded away all our picks and our future to get him. and for what?!? So he can load manage all season come back after a 4 month hiatus and stink up a game 7. His ass can go to!!!!

Clint parks you are a straight clown this shows Kawai “Mr quiets “ true nature to have anything to do with you! U talked shit about bron earlier this year about who’s in the lab and who isn’t??? how’s that tweet working out for you ? Who choked in the playoffs and who didn’t?

The Clippers are an absolute dumpster fire right now, with the early exit from the NBA Playoffs showing a team that lacked all sorts of chemistry and discipline; as we saw lots of their players leaving the NBA bubble and get called out for some of their decisions. Man, this definitely wasn’t how the season was supposed to play out.

As for the future, there’s no telling if the tweets from Kawhi Leonard’s trainer will impact any of the All-Star’s relationships with his teammates. Everybody inside the organization is frustrated, so maybe the superstar can just chalk it up to that. Then again, Clint Parks’ tweets could be just another toxic chapter in the wild book of the Clippers over the past few months.