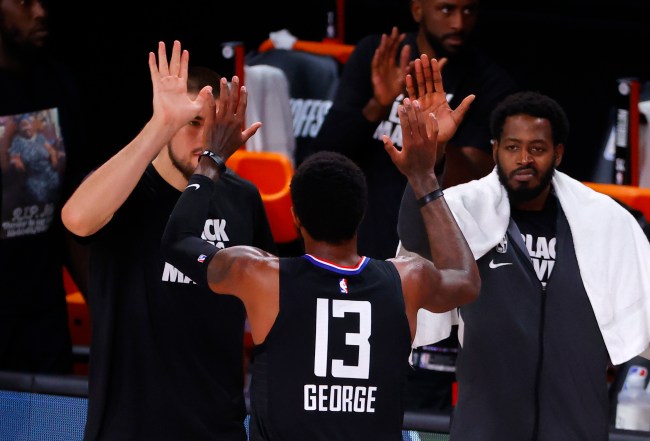 There is nothing America loves more than watching Goliath fall.

There is something arousing about a behemoth cracking under its own weight, being embarrassed and humbled in the process. There is a reason we won’t stop until our long-beloved dancing talk show host is buried alive under a slew of workplace misconduct allegations and large swarths of people go to bed at night praying Joe Rogan will drop an N bomb.

The Clippers are the latest Sure Thing to doo doo their pants, and sports media is salivating to perform a colonoscopy.

And now this, from Chris Broussard so take a grain of salt and cut it in half.

"I've been told some of the Clippers role players actually think they're as good as Paul George. They're having problems w/ the special treatment he's gotten from Doc Rivers. They can handle Kawhi getting special treatment bc for the most part he delivered." — @Chris_Broussard pic.twitter.com/bGY7d3B8D4

“I’ve heard that become of Paul George’s inconsistent play, it’s difficult for his teammates to put up with his platitudes.

He had two 10 point games against Denver, a 9 and 11 point game against Dallas, so they really don’t want to hear him giving speeches in the locker room when a max player, former MVP candidate, perennial All-Star playing like that. So that is a problem.

I’ve actually heard that some of the role players on the team think they’re as good as Paul George. They are having problems with the special treatment that he’s gotten from Doc Rivers.

They can handle Kawhi getting the special treatment because for the most part he delivered, you know what you’re getting from him. But Paul Pierce (*George) was up and down and I’m told some guys think they’re just as good as him.”

Marcus Morris and Patrick Beverley reflexively come to mind here as the players who are not better than Paul George but think they are.

Paul George had an awful playoffs, but lets fight the urge to be prisoners of the moment. Just last season, George was averaging 28 points a game and was in the conversation for MVP. So what if he had a handful of games when he channeled his inner Darko Milicic, THESE ARE STRESSFUL TIMES FOR EVERYONE.