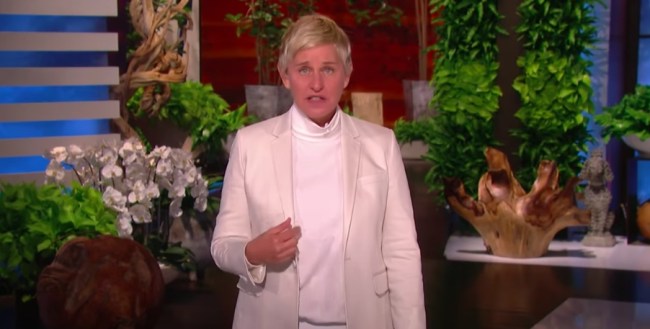 One of the most bizarre storylines of 2020—outside of a worldwide contagion, Andrew Cuomo’s nipples, and Kim Jong Un dying (??)—is the vilification of dancing comedian who branded herself around a ‘Be Kind’ mantra.

Ellen DeGeneres publicly apologized Monday amid allegations of toxicity, racism, sexual harassment, and misconduct that resulted in the firing of executive producers Ed Glavin and Kevin Leman and with co-executive producer Jonathan Norman.

While real allegations of misconduct were brought to light, former Ellen employees couldn’t help but bring the petty, shaming the 62-year-old comedian for not saying hello or calling Steve Jobs to tell him the iPhone font should be larger or making employees who smell like a dumpster go home and shower.

Ellen employees reportedly didn’t appreciate their boys making light of the allegations in her monologue on Monday, which started off asking viewers, “How was everybody’s summer? Good, yeah? Mine was great. Super terrific,” and then telling them, “Let me give you some advice out there if anybody’s thinking of changing their title or giving yourself a nickname, do not go with the ‘be kind’ lady. Don’t do it.”

Buzzfeed spoke with several of these employees, both former and current, about their gripes with the apology and it appears Ms. DeGeneres is far from off the hook.

“Not only did Ellen turn my trauma, turn our traumas, into a joke, she somehow managed to make this about her,” one former employee said.

“When she said, ‘Oh, my summer was great’ and that was supposed to be funny I thought, ‘It’s funny that you had a rough summer because everyone was calling out all of the allegations of your toxic work environment and now you’re the one suffering?’” another former employee said.

“When you’re talking about people who have accused her leadership of the seriousness of sexual misconduct, I don’t think it’s appropriate to have jokes in the monologue,” a former employee said.

“I don’t feel sorry that she’s in a shit load of trouble because she branded herself the ‘be kind’ person,” a former employee said. “She’s acting like it was something she said in passing that just stuck with her. It’s not something that stuck with her, it’s not an accident. She went forward with this idea and this marketing strategy that was not true behind the scenes.”

Speaking about how employees received minimal communication about the direction of the show post-allegations.

“It’s always tactical,” the employee said. “The average person will listen to it and make their own choices, but what people don’t always take into account is that information is power, and she’s sharing it now because it’s for premiere week and it’s to get viewers back, and that just feels the opposite of what this message is about.”

Comments on the Ellen YouTube channel weren’t much better.

If I were Ellen, I’d take my $330 million and just sail into the sunset.