Vince Carter’s Right, Kawhi Leonard SHOULD Be In The GOAT Discussion If He Wins One More NBA Title 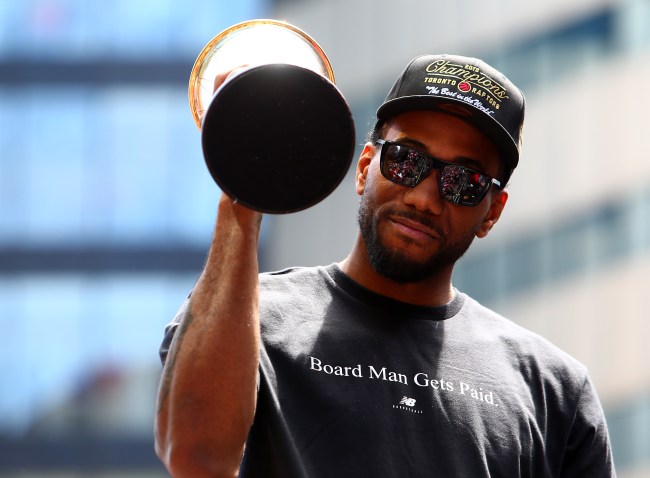 After Kawhi Leonard won an NBA title with the Toronto Raptors last season, a couple of my buddies and I asked a complicated question: Will he reach GOAT status should he win at least one more? Sounds absurd on the surface, but, dig a little deeper and it makes sense to at least consider — Kawhi has already won two championships by the age of 29, and has a legit chance of adding a few more to his resume now that he and the L.A. Clippers are serious title contenders.

What’s more impressive is this: If Leonard wins a title with the Clips, he’ll have won one with three different franchises, a feat that just two players have achieved in NBA history (Robert Horry and John Salley) — and something that LeBron James is trying to accomplish with the Lakers.

Speaking of, lest we forget that Leonard’s two titles could easily already be three; had he just known how to hit two free throws during the 2013 NBA Finals. Remember how he choked during Game 6 against James’ Miami Heat, which led to Ray Allen’s unthinkable three-pointer that (ultimately) led the Heat to a title win a game later?

In basketball terms, Kawhi Leonard is just entering his prime. But, because he keeps such a low profile, is a little bit socially awkward and (seemingly) has been around forever, most of us forget that he’s still probably got a good 5-6 years left of high level basketball. For that reason, it’s not surprising to hear some of his peers throw Kawhi serious praise, with Vince Carter even hinting that the dude deserves GOAT consideration should he win another championship — the same thing my buddies and I wondered last year.

Joining ESPN’s Get Up on Monday, take a look at what Carter had to tell Mike Greenberg when asked about how a third title would impact Leonard’s legacy.

Vince Carter says another title for Kawhi puts him in the same conversation as MJ, Kobe and LeBron

That might be unthinkable for some people to hear, but is Carter’s take actually accurate? In my opinion, absolutely.

Although some people may not think of Kawhi Leonard as a top-5 player in the league at this very moment — mainly because he doesn’t have the flash or self-promotion that guys like James Harden or LeBron has — there’s no denying that he deserves to be considered in that group. Plus, when the pressure’s at its highest, other than in the 2013 NBA Finals, Leonard always seems to deliver. Should he do that again this season to win his third title, Carter’s right, it does bump him into that upper echelon of all-timers. It’d also tie him with James with three rings.

Now, here’s where things get a little tricky with Leonard: Regular season stats and accolades. He has never led the league in scoring. He has only finished in the top-3 in league MVP voting twice in his career. He often utilizes load management during the regular season in order to stay fresh for the postseason. All of these things are reasons why some will say he can never be considered in the GOAT conversation.

But you know what we should all care about more than that? Rings. And Kawhi currently has two (and a real chance to get a couple more with the Clippers). Forget all the regular season stuff. Who cares about scoring titles and individual accolades. When the lights are the brightest, Kawhi Leonard becomes the baddest man on a basketball court on the planet — so don’t be so quick to downplay the idea that he should be considered a top-5 player all-time if he wins one or two more NBA titles in the next few years.