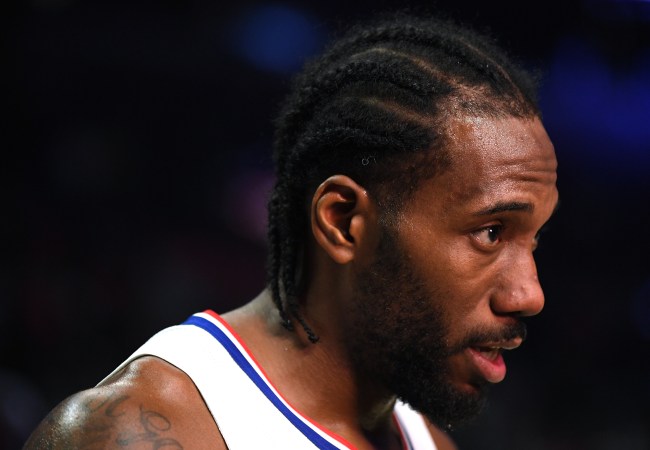 Kawhi Leonard is one of the most dominant players in the NBA, as he’s proven to be one of the few defenders who can shutdown guys like Giannis Antetokounmpo and LeBron James, among others, while also dominating on the offensive end by taking over games. I mean, let’s face it, the Toronto Raptors aren’t winning an NBA title without Kawhi going off last postseason, which is why he won (another) NBA Finals MVP.

Now a member of the Los Angeles Clippers, Kawhi Leonard has already missed five of the team’s first 14 games, which may be concerning to some fans that the superstar may actually have a lingering injury. Fear not, though, because, according to reports, it’s just the team playing things safe, implementing a load management strategy that keeps Leonard fresh all season long. It worked in Toronto last season, and, apparently, it’s what the Clippers think will work best to try and win a championship this season, too.

While Leonard might be healthy enough to play, FS1’s Chris Broussard made a pretty bold statement recently about the overall status of the three-time NBA champ, arguing that Kawhi’s body might actually be “incredibly fragile.” As Broussard stated on Undisputed, Leonard has never played a full 82-game season, and is averaging just 61 games in the seven seasons he was healthy — which includes the nine he played in 2017-18 with a lingering injury, as well as any games this year. Take a listen at Broussard’s full commentary below.

"As big and tough as Kawhi Leonard is, he is apparently incredibly fragile. I've got to the point where I'm fine with his load management because I actually think he needs it." — @Chris_Broussard pic.twitter.com/kN2nrBj55M

Now, is Kawhi Leonard actually fragile? Who really knows? But Chris Broussard does offer up a compelling argument when considering the star forward annually misses about a quarter of the season every year, making it seem like his body definitely doesn’t handle the wear and tear of a full season too well. But, given Leonard’s success in the playoffs, it’s all overlooked since he dominates during the time of year it matters most.

This whole load management issue has been something that has caught a lot of heat in the past few weeks, with everyone from Jalen Rose to Michael Jordan arguing that it’s not good for the league. But until the NBA steps in and really punishes teams for resting guys just for the hell of it, players like Kawhi Leonard will continue to sit throughout the season to stay fresh for a hopeful championship run in the spring — because it’s proven to be an effective strategy for this particular superstar.