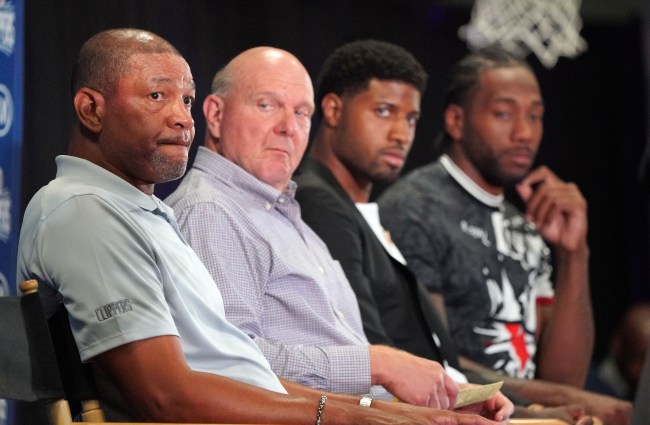 Just look at the face in the photo above from Steve Ballmer and ask yourself if that’s a man who had faith that his then head coach, Doc Rivers, had his trust and faith to go win an NBA title this year. If a picture is worth a thousand words, then, sheesh, the billionaire Los Angeles Clippers owner sure didn’t mince his opinion with that death stare.

Photos aside, though, after Rivers surprisingly got fired by Ballmer earlier this week, the basketball world wondered what happened behind the scenes. Sure, the Clippers blew a 3-1 series lead to the Denver Nuggets in the second round of the NBA Playoffs, but was that really a fireable offense for the head coach given a dysfunctional season that included playing games in an isolated bubble and missing key parts of the roster like Lou Williams and the league’s “Sixth Man of the Year,” Montrezl Harrel, among others? Apparently, Steve Ballmer sure as hell thought so.

While Rivers is now gone, and has already accepted a new head coaching gig with the Philadelphia 76ers, the sting is still very real for Steve Ballmer and his Clippers. So much so that there are already rumors that the roster could be blown up soon, too, with All-Star Paul George possibly being the next one sacrificed for the team’s failures. What a mess the Clips continue to be.

Given the abrupt end to their championship-or-bust season and the nature in which their season ended, it shouldn’t come as a surprise that Ballmer was more than a little pissed about it. Firing Rivers was what, ultimately, happened, but, according to reports, the owner wanted to do more than just that: He, in fact, reportedly was so “ballistic” after the Game 7 loss to Denver that he had to be dissuaded from of getting rid of the entire organization, players included.

That’s per Bill Simmons and Ryen Russillo on the latter’s podcast on The Ringer, which can be heard by clicking the link in the tweet below.

It’s one thing for Steve Ballmer to be pissed about the loss to the Nuggets, but it’s another for the owner to bring up old shit and be mad about it, too — but that’s what he allegedly did. Per Simmons and Russillo, the billionaire hated seeing Denver pick apart his team with budding young star Michael Porter Jr., especially after he urged Doc Rivers and the front office to draft Porter during the 2018 NBA Draft. Instead, L.A. used picks 12 and 13 in the first round on Shai Gilgeous-Alexander and Jerome Robinson, who have both since been traded.

After a 2019 offseason that saw signing Kawhi Leonard and trading for Paul George, everyone talked about the future “Battle for L.A.” in the playoffs that was bound to take place between the Clippers and Lakers. That never materialized, and, while Doc Rivers was Steve Ballmer’s sacrificial lamb, it sounds like the owner was so pissed that he was initially thinking about a firesale.