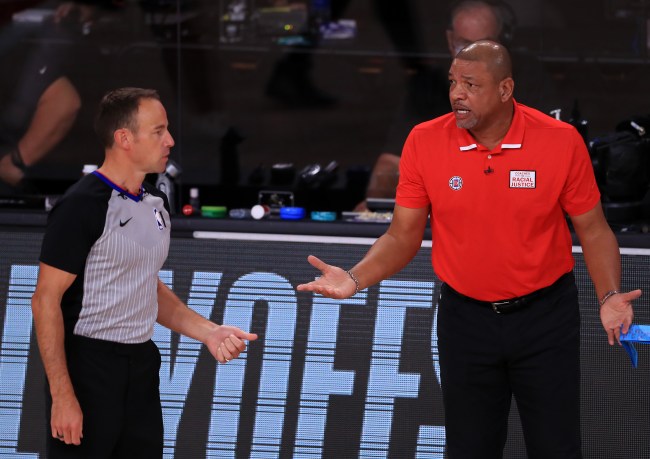 After Doc Rivers was canned by the Los Angeles Clippers earlier this week as the team’s head coach — which was both shocking and (probably) the right thing to do after his long tenure in L.A. produced a grand total of zero titles — it was only a matter of time till the 58-year-old would get another opportunity. But, sheesh, who would’ve thought it’d be just a few days later, with the Philadelphia 76ers officially announcing Thursday afternoon that Doc was their new guy, per ESPN’s Adrian Wojnarowski.

After a rapid courtship and negotiation, Doc Rivers has reached agreement on a deal to become the next coach of the Philadelphia 76ers, sources tell ESPN.

For Doc Rivers, it kind of seems like a parallel move; only to the Eastern Conference. With Philly having two young stars in Joel Embiid and Ben Simmons, the Sixers have underachieved in the past couple years, with many pointing to possible dysfunction between the big man and the point guard. Can Rivers be the one to clear the air and find the right scheme for both to succeed? Time will tell.

While Doc brings a championship pedigree with him to Philly, outside of his one title with three Hall of Famers in Boston 12 years ago, what has he really done? Sure, he got a perennial losing franchise (the Clippers) to the NBA Playoffs in six of his seven seasons at the helm, but, c’mon, that shit won’t fly in Philadelphia. It’s truly championship or bust given the talented roster, youth and heartache’s the past few seasons.

Following the announcement of Doc Rivers being named the Sixers’ new head coach, NBA fans on Twitter had plenty of reactions, many of which were clowning the team for the hire. Just take a look below at what people had to say.

sixers when they get eliminated in the first round pic.twitter.com/Y77fX9Ya89

The sixers after blowing a 3-1 lead pic.twitter.com/S9xjvjiyw1

Sixers fans after seeing him "coach" in the postseason: pic.twitter.com/KES6iEcKLN

There’s no denying Doc Rivers is a good coach, but is he a great one? That’s pretty debatable. Sure, there’s faith that he’ll lead the Sixers to a solid regular season and into the playoffs as a top-4 seed (again), but, unless this team actually reaches the NBA Finals in the next few seasons, it’s easy to see why so many people on Twitter think it was a pretty questionable hire.