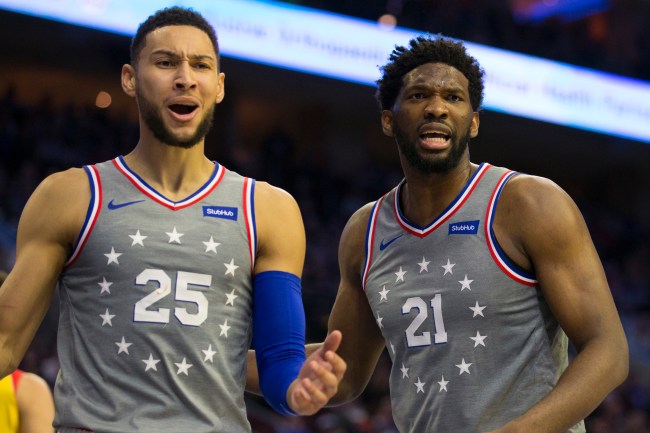 Philadelphia 76ers general manger Elton Brand is in a precarious position this offseason now that his team just got (embarrassingly) swept from the NBA Playoffs by the Boston Celtics. That’s because Brand — who already fired Brett Brown as the team’s head coach — needs to decide if it’s time to ride with the players he has and go make a championship run with new leadership, or try to move one of his young All-Stars, Ben Simmons and/or Joel Embiid.

Obviously, both Simmons and Embiid are both studs, and have proven themselves as rising stars in the league. Problem is, they’ve had some pretty bad luck thus far during their time with the Sixers, as they’ve encountered some chemistry issues and, worse, lingering injuries that have held Philly back from really being considered a championship level team.

After, arguably, being the most disappointing team in the NBA this season, Elton Brand and the Sixers’ front office seems to be looking at keeping the roster intact (for better or worse). When asked about his offseason plans for Ben Simmons and Joel Embiid, the general manager said he’s not looking at moving either one of them, and, instead, wants to complement them.

Elton Brand: "I'm not looking to trade Ben or Joel. I'm looking to complement them better."

Now, it’s an admirable approach by Elton Brand and the Sixers, because, as mentioned, Simmons and Embiid are All-Stars who could develop into top-3 players at their respective positions in the next couple years. But because Simmons continues to literally fear taking a shot outside of 15 feet, and because Embiid continues to be moody — with both fighting those lingering issues mentioned above — once Twitter saw Brand’s offseason game plan for both players, people couldn’t help but dog the idea.

"I'm not looking to trade Ben or Joel. I'm looking to complement them better." pic.twitter.com/CVE7OtOhjn

yeahhhh the problem wasn't Brett Brown was it…. pic.twitter.com/XDG4lpQXDs

Like many on Twitter, it’s crazy to me that the leadership on pro sports teams continue to side with the whole “maybe next year” mentality. For fuck’s sake, it doesn’t work, and it’s only killing the chances of actually competing for a championship.

Sure, Elton Brand might be giving the PC reply here in regards to Simmons and Embiid — knowing they’re both popular players who the fans want in Philly for the long haul — but it’s like he’s forcing a square peg into a round hole by already revealing his plans for both this offseason. We’ve seen what the two can do together, it’s not working, so why not move one of them for assets like young players and a high draft pick to try and hit restart? There’s nothing wrong with that move; but, of course, too many front offices do what’s best for their job security and not the bold move for the good of the franchise.

Who knows what comes next for the Sixers and the Ben Simmons-Joel Embiid duo, but with Elton Brand already proclaiming the two are coming back for another run next season, hoops fans in Philly might want to expect more disappointment come next spring.