There’s A Reported Trade Rumor Involving Kyle Lowry And Ben Simmons, But It All Centers Around LaMelo Ball 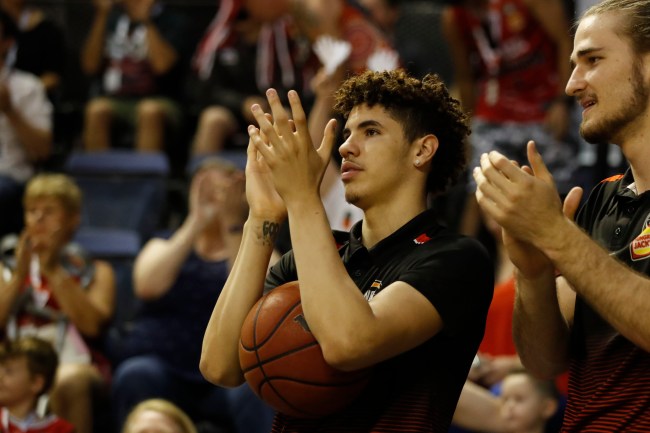 LaMelo Ball is set to become a lottery pick in this year’s NBA Draft, with the teenager even projected to go as high as No. 1 overall should the team winning the top pick need a dynamic point guard. After playing in Australia and averaging 17 points, 7.5 rebounds and 6.8 assists for the Illawarra Hawks in the NBL League, LaMelo now takes aim at following in his older brother’s footsteps, with Lonzo Ball being drafted No. 2 overall in the 2017 draft.

While there’s no telling what kind of player LaMelo Ball will become, his loudmouth dad, LaVar Ball, already thinks he’ll be a star, and has announced certain expectations NBA teams should know about before making the decision to draft his youngest son. And, although LaVar is a nightmare who will speak his mind and can be a distraction, that probably won’t deter LaMelo from being selected high in the 2020 NBA Draft.

But here’s where things get really interesting, because, according to college basketball expert Rashad Phillips, there are lots of teams who have their sights on LaMelo Ball, so much so that it could lead to a mega trade involving All-Stars Kyle Lowry and Ben Simmons; who was a former No. 1 overall pick himself just a few years ago.

While talking to Brandon “Scoop” Robinson the other day, Phillips said that the defending NBA champion Toronto Raptors are enamored with LaMelo, and, in an attempt to get younger, could end up shipping off the 34-year-old Lowry.

Appearing on today’s episode of the podcast, Phillips shares Raptors could try to move up in the NBA Draft in a deal with Sixers, Warriors, Raps involving Kyle Lowry, Ben Simmons.

“I really believe that the Toronto Raptors are trying to move up in the Draft to get LaMelo Ball.”

“I still think there’s some trades that’s going to happen and teams are going to try to move up for LaMelo Ball. I believe the Toronto Raptors will try to move up and get him. And if the Raptors can somehow get that number one pick out of Golden State in a three-team trade with Philadelphia, Toronto and Golden State; if they can mix some players and money around, I believe the Raptors will take LaMelo Ball at number one. I just believe that he has the flare of the game. He understands the platform. He understands the entertainment of the game. He understands the pulse of the game and his ability to score, knock down shots. His vision, his size, just a kid who was bred to play at this level. So I’m extremely excited to see what he’s going to bring to the table for an NBA franchise and its fans.”

That’d be a huge trade, and would really reshape the league. But it gets even crazier, as Phillips added that, as part of this projected deal, the aforementioned Ben Simmons would find himself moving on from the Philadelphia 76ers, as the hoops analyst thinks the experiment in Philly playing alongside big man Joel Embiid is over.

“I just believe that Ben Simmons and Joel Embiid just are not compatible in regards to how the NBA style is played. Not personally compatible, just the way the spacing; Ben Simmons’ inability to make jumpshots, Joel Embiid’s ability to want to shoot jumpshots, I just don’t think it’s a good mix. If I’m the Raptors, I’ll trade Kyle Lowry to Philly. Philly needs a point guard, I believe Kyle Lowry is one of the premiere point guards in the NBA. Philly needs that. I would send Ben Simmons to Golden State for maybe a pick and some players. If I’m the Raptors, I’d try to get in that mix to get LaMelo Ball.” “Don’t be surprised if you do see that,” he told me. “Between those three teams, there’s some business that needs to be done.”

The key to all of this may be the Golden State Warriors, who, after reaching the NBA Finals in five-straight seasons, fell off the map due to injuries and find themselves with the best odds to land the No. 1 overall pick in the 2020 NBA Draft. With All-Stars Stephen Curry and Klay Thompson expected back at full strength next season, some believe the Dubs will trade their high draft pick for a more established player to continue to chase championships — which could mean landing an All-Star rather than draft a young player. With tons of assets at their disposal, like Andrew Wiggins, Golden State holds lots of possible scenarios that could shake up the league; should the land the top selection in the draft.

Who knows what might happen with LaMelo Ball, but, with so many teams intrigued by him, he could be a key piece in what the league looks like in the short-term more than just the long-term.