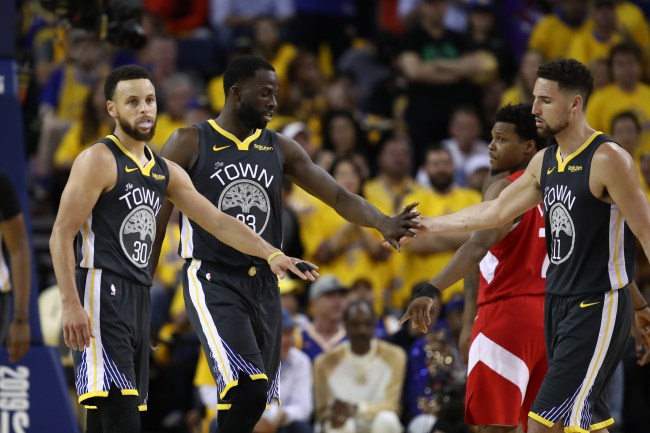 The Golden State Warriors have had a string of bad luck in the past 10 months or so, with the team losing Kevin Durant during the 2019 NBA Finals (and then in free-agency), as well as seeing sharpshooters Stephen Curry and Klay Thompson go down with serious injuries. That’s not to say anyone’s feeling sorry for the franchise, though, considering the team has won three of the past five NBA championships, but it has been a crappy season to this point for the Dubs.

Currently holding the second-worst record in the NBA and the worst record in the Western Conference, the Warriors are destined for a top-3 pick in the 2020 NBA Draft. So, while some basketball fans are celebrating the fact that Golden State is an embarrassment this season, the fact that they’ll probably be returning a healthy Curry soon and a healthier Thompson next season — while adding a lottery pick — should be a reminder of how lethal this team will be again next season at full strength. Who knows if the team will even keep that top pick, as there have been rumors that the franchise could trade it for yet another All-Star to compete for a title next year.

While there are lots of unknowns with the Warriors in the future, in the present, there’s one thing that’s definitely known: The team will not be tanking, just piling up the L’s in hopes of landing the No. 1 overall pick in this year’s draft. Why? Simply put, because owner Joe Lacob doesn’t want to ruffle the feathers of the basketball gods.

Speaking at the NBA’s Tech Summit during All-Star Weekend, take a look at what Lacob said about the current state of his team, making sure everyone knew that the Warriors won’t just be rolling over and dying the rest of this season.

“Steph is coming back. That’s not even a discussion internally,” Lacob told Mark Medina of USA TODAY Sports during the NBA’s Tech Summit during All-Star Weekend. “He’s ready to play so he should play. By the way, we’ll try to win every game. I’m not really about, ‘Let’s lose every game so we can get the best pick.’ You try to do that, you’re messing with the basketball gods. So we don’t believe in that.”

Whether you believe in the basketball gods or not, just ask New York Knicks fans about their opinions on the matter. After completely tanking last season in hopes of getting the No. 1 pick — which everyone knew would be Zion Williamson, a presumed once-in-a-generational talent — the Knicks ended up slipping to No. 3 overall in the 2019 NBA Draft. While they still got a young star (RJ Barrett), they missed out on Zion Mania.

There have been plenty of other examples of franchises tanking for a higher draft pick across all sports, and, since the Warriors have a real shot at going from lottery to the NBA Finals next season, it sounds like Joe Lacob has his team treating this season like any other one — go out and try to win ’em all. That’s the right mentality, and one that the owner is hoping is appreciated by the so-called basketball gods once his roster is back to full strength.