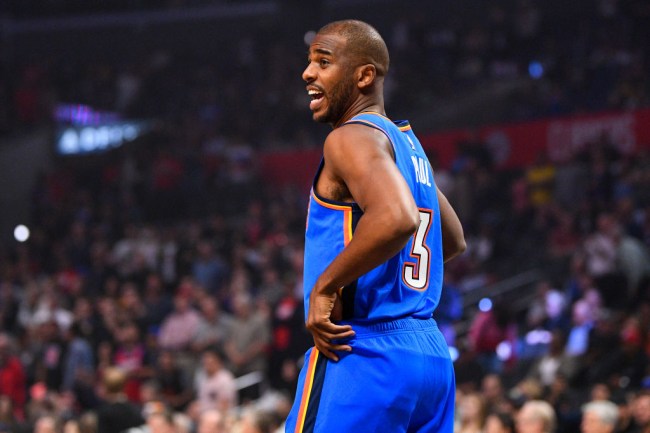 Some people may call Chris Paul a genius after he called out Jordan Bell for an untucked jersey last week that resulted in a crucial delay of game call while others may simply call him a snitch. I for one am going to go with the latter.

Sure, Paul was simply exposing a rather moronic rule in the NBA, but still, he’s ruined the untucked jersey for the entire league now.

Let’s look back at the Thunder – Timberwolves game to paint the full picture here.

Minnesota led Oklahoma City by two late in the fourth quarter and was set to essentially ice the game at the free-throw line. Jordan Bell checked into the game for Minnesota and Paul noticed his jersey wasn’t tucked in so he pointed it out to referee Scott Foster for a delay of game call. The Thunder were gifted a technical foul free-throw, sent the game to overtime and eventually won the game 139-127.

CP3 told on Jordan Bell for having an untucked jersey 😂😂😂 pic.twitter.com/g3GROeRf0N

Well, it turns out that this move by Paul has sent a message around the league.

Elfrid Payton checked into the game for the Knicks in their contest against the Nuggets with his jersey untucked, and you guessed it, was whistled for a delay of game. The best part about the whole situation? The referee looked at Payton and said ‘thank Chris Paul.’

Elfrid Payton gets delay of game for entering game with untucked jersey, ref tells him to thank Chris Paul. pic.twitter.com/qbWUnJyxNJ

The wildest part of the video is that Payton was literally tucking in his jersey as he made his first step onto the court when the referee blew his whistle.

Like I said, Paul has ruined the untucked jersey in the NBA for everyone thanks to snitching and pointing out perhaps the dumbest rule in the league.

Sure, it makes sense that the NBA wants its players to have their jerseys tucked in, but when it truly affects the outcomes of games I think it’s gone a little too far.