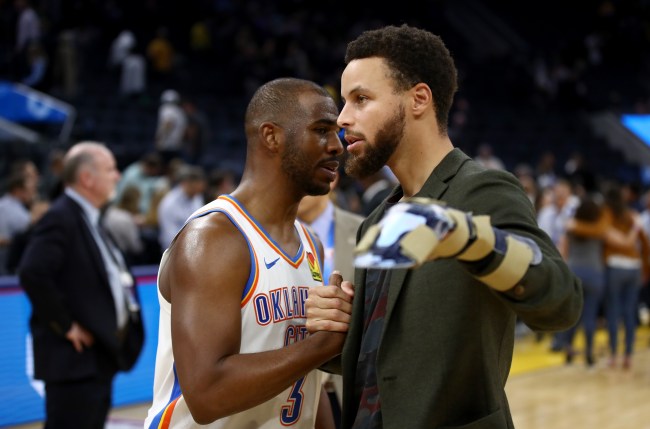 Chris Paul is a future Hall of Famer who’s proven his worth this NBA season with the way he’s kept the Oklahoma City Thunder in playoff contention. After OKC traded away both Russell Westbrook and Paul George last offseason, many assumed the team was headed for a rebuild, and that Paul — a 10-time All-Star who’s been changing a championship his entire career — would force a release or a trade to a contender. That didn’t happen, and, instead, the point guard’s guided his young squad into a possible postseason appearance.

Given the greatness that Chris Paul’s displayed throughout his career, it’s unsurprising to hear some stories pop up about how his game’s viewed and respected around the league. Once one of the most dominant and skilled guards in the league, one team in particular, the Golden State Warriors, were so fond of Paul that they nearly sold the farm in order to acquire him in 2011 when he was playing on the New Orleans Hornets (now the Pelicans) — but it was the point guard who axed the trade, not the Warriors.

According to the book The Victory Machine by Ethan Strauss, the Warriors offered up both Stephen Curry and Klay Thompson for Chris Paul, who did technically agree to the deal, but told Golden State that he wouldn’t re-sign with them in the offseason when he was set to become a free agent. Here’s an excerpt from the aforementioned book detailing the original trade offer.

“The Warriors attempted to trade Steph Curry and Klay Thompson for Chris Paul in 2011. It was far from the only time Curry was shopped, but in this instance, the deal was very close to completion. Myers made the offer and Hornets GM Dell Demps was receptive. The catch was Chris Paul, who wanted out of New Orleans but had no intention of playing for the woebegone Warriors. Paul told the Warriors they could do this trade, but he wouldn’t be staying when his contract was up at season’s end.

The Hornets weren’t the only organization to narrowly lose out on the deal of a lifetime. According to one GM, ‘The Warriors were blind lucky that they were unsuccessful in trading Steph and Klay together for the stars they offered them together for,’ he said. ‘There were many, many people they tried to get and failed.’

Second, as the anonymous GM mentioned, the Warriors are lucky AF that a deal involving either one or both Curry and Thompson never went through. It not only could’ve cost the team a chance at the dynasty they had, but it would’ve changed the entire landscape of the NBA in the process.

As for the story itself, when appearing on UNINTERRUPTED’s After Party. this week, Chris Paul confirmed the Strauss story, and talked about how close the 2011 trade with the Warriors was to being complete. Take a look below.

“Yeah, I remember it. True story,” Paul said when asked about the Curry-Thompson offer. “That happened with a few teams. I actually never wanted to come out West. I’m born and raised on the East Coast. You know what I mean? So I never was crazy about L.A. and all that, until I finally got out here and lived out here.

“At that time, all I knew really about the Bay is I had been there to play the games and everything was just so hilly and I just thought about ‘Full House.’”

It’s also pretty funny to hear Chris Paul talk about how he was disinterested in ever playing for a west coast team because of his upbringing on the east coast; until he actually experienced it himself when the Hornets traded him to the Los Angeles Clippers in 2011 to create “Lob City”. And it’s weird AF to think about how the entire NBA could’ve been different had he just agreed to sign a deal with the Warriors had he been traded there. Just one simple decision had a huge impact on the future of the league.