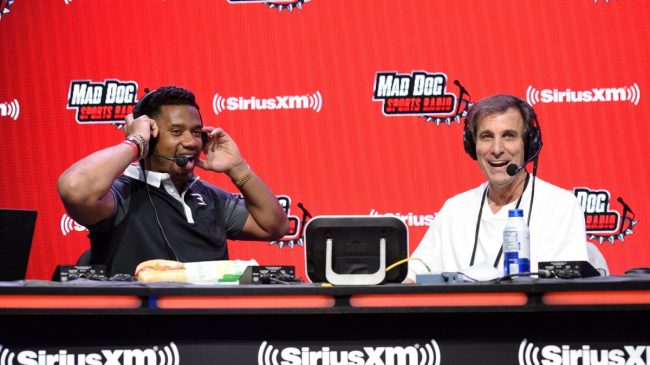 There is such a thing as recency bias. We see it all the time in sports. When folks debate the top athletes or teams of all-time, fans often remember the last thing they saw.

But in Chris “Mad Dog” Russo’s case, he seems to do the opposite.

In his latest episode of First Take, the host was asked to give his top five all-time QB-TE duos. This, of course, coming after the announced retirement of star pass catcher Rob Gronkowski.

Gronk, who teamed up with Tom Brady throughout his career, was one of the scariest receivers on the planet. The Brady-Gronk tag team connected for the most scores in playoff history (15), and they hooked up for touchdowns more than 100 times over their careers.

Both Brady and Gronkowski are arguably the greatest to ever play their position, yet Chris Russo ranks them fifth among all-time QB-TE combos.

And if that wasn’t enough, his top four have everyone scratching their heads.

Here is Mad Dog Russo's list of the top QB-TE duos ever. He's not even trying anymore. pic.twitter.com/hTbXBwCV3g

Chris Russo is being blasted for his ridiculous QB-TE rankings. The No. 5 ranking of Brady and Gronk was already criminal, but the rest of his list equally as awful.

It’s filled with guys who haven’t played the game in 40 years. Much before the passing era really took off. Just looking at the No. 4 ranking disqualifies this list.

Bart Starr and Ron Kramer had four seasons where they didn’t connect for a single score. They played together seven years.

We know folks are often slow to accept the newer generation but come on. If Russo’s goal was to get folks talking then it worked.

Social media in an uproar over Russo’s awful take

Fans were quick to take Chris Russo to the woodshed for his awful rankings. Take a look at the immediate reaction.

This is absolutely the funniest thing I have ever seen. It cannot be real. https://t.co/mgnZKOId6Q

Your dad just read this list and nodded his head knowingly. These names are the golden age of NFL Films. https://t.co/SkEhE44OTc

absolute perfection. laughed out loud just reading the graphic. this production meeting must have been funnier than snl. they had to be dying. https://t.co/nbtcCQTxaR

Dog is committed to the bit. https://t.co/2EIok8HRkw