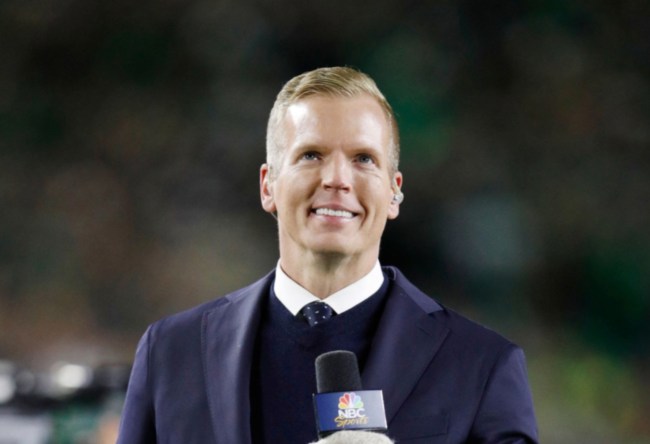 NFL referees face criticism each and every week, especially this season with the new taunting rules in place, but the backlash toward Tony Corrente is slowly reaching Angel Hernandez levels of ridiculousness.

The majority of NFL fans out there believe that Corrente had it out for Bears linebacker Cassius Marsh on Monday night. Form NFL QB Chris Simms firmly stands in that same camp given his past experiences with Corrente.

Marsh was called for taunting after a big sack against the Steelers and as Corrente was pulling out his flag, he appeared to deliberately hip-check the Chicago linebacker as he jogged back to the sideline.

Corrente’s actions during the Bears-Steelers game isn’t at all surprising to Simms.

During Thursday’s edition of ‘Pro Football Talk‘, Simms shared a story about taking a very late hit in a game against the 49ers in which Corrente was officiating.

As Simms explains during his story, he got up and complained to Corrente about the lack of a flag and may have cursed at him. From that moment forward, Corrente stopped talking to Simms and didn’t give him the standard courtesy of warning his team when a TV timeout was about to end.

Simms explained that Corrente later admitted during the same that he was acting that way intentionally.

“Usually when you come back from commercial breaks and there’s stoppage time, the referee kind of gives the quarterback a warning like, ‘Hey, call your play, I’m about to blow the whistle.’ He’s not doing anything to me,” Simms recalled, as transcribed by Larry Brown Sports. “Now we’ve gone through three commercial breaks, a quarter break, and he’s just blowing the whistle and starting the clock while we’re all just standing around waiting for things.

“Finally, I go, ‘Are you gonna warn me before you start the clock again? Usually, that’s protocol.’ He goes, ‘Are you gonna apologize for what you said to me earlier?’ I wanted to lose my crap. After the game, I wanted to call him out. If we won, I probably would have. He just showed me he got personal and was gonna take the game into his own hands there.”

Simms also went on to say that he believes that if Corrente didn’t have it out for Marsh, he would’ve thrown his flag five seconds earlier. Instead, he threw it while simultaneously hip-checking him.