Christian Cage Recalls Making An Improbable Save On NHL’s Doug Gilmour In A Scrimmage, & How Doug Came Back With A Vengeance 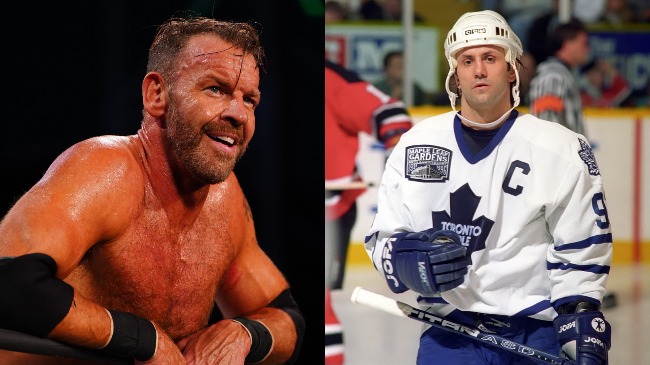 Cage, who began playing hockey at age 4 or 5 “like any good Canadian kid,” recently appeared on NHL’s Celebrity Wrap to reveal why this scrimmage holds a special place in his heart and validated him as the Grant Fuhr-esque goalie he modeled his game after. If only for a moment.

You'll never forget making a save on Doug Gilmour (@douggilmour).

“I remember this one time I got invited to hockey camp, it was run by this defensemen, guy by the name of Jeff Brown, who at the time played for the Quebec Nordiques.

And Doug Gilmour had a cottage in the area where this hockey camp was, so they would do a big scrimmage at night and a couple of the goalies would stay and play in the scrimmages. So I happen to be the goalie who was in this night and Gilmour came by just to get a skate in and scrimmage with everyone. So of course everyone’s super thrilled that Doug Gilmour’s playing.”

Doug “The Killer” Gilmour is a Hall of Famer who played 20 seasons in the NHL, and recorded 1,414 points in 1,474 games during that span. He was a member of Calgary’s 1989  Stanley Cup championship team and won the Frank J. Selke Trophy as the NHL’s best defensive forward in 1992–93.

That is the level of talent that casually strolled into the rink that day.

“He steps in, gets a little bit of a breakaway, I’m sure he was going less than quarter speed, but in my mind he was barreling down the ice for this breakaway and I stopped him. He kind of gave a little smile and of course everyone made a big deal about it. And he gave me a wink.

A couple plays later, he comes in, steps over the blue line and whistles one. I heard it whistle and go right past my shoulder and head and into the top corner. I didn’t even move. It just froze me. And I think if I had moved into it it might’ve killed me. Then he came by and gave me a little pad tap. And that was the highlight of my goalie career was getting a stop on Doug Gilmour.”

So we’re tied on the ice. Guess we will have to settle it in the @AEW ring 😂

Would 400 percent watch a two-pronged event that would feature Christian Cage trying to stop Doug Gilmour in goal and Doug subsequently trying to maneuver cage into a Killswitch. That PPV would make a billy $.

.@Christian4Peeps took the net against @NHL Hall of Famer @douggilmour.

Now Doug must try his luck in a @AEW ring.