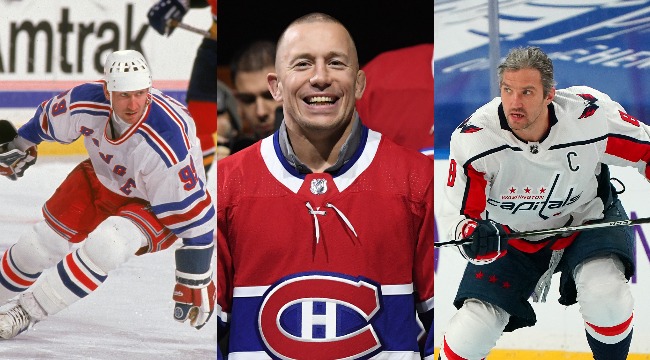 Of all the cartoonish That Can’t Be True stats floating around in the sports ecosystem, a cursory dive into the career of Wayne Gretzky will have you questioning the very foundation of reality.

Certainly it cannot be true that if Gretzky never scored a single NHL goal, he’d still be the league’s all-time leading scorer. But it is.

It feels like total hogwash that the 10-time Art Ross trophy winner was not only the fastest player to score 1,000 career points (424 games), but the second fastest to score 1,000 points when he went from 1,000 to 2,000, becoming the NHL’s only player ever to score 2,000 points in regular-season play in the process. But this is real life.

The true measure of Gretzky’s greatness can be measured by the impact he’s had on some of the greatest athletes alive, including UFC icon and NHL superfan Georges St-Pierre.

The former two-division champion appeared on NHL Celebrity Wrap to gush over Gretzky’s resumé and stake his claim that no one is sniffing his all-time goals record.

“Wayne Gretzky for me is a model, he’s an inspiration because I believe he’s one of the athletes in my [lifetime], I’m 99% sure that his [goals] record will never be broken.

And on top of that, he was an amazing role model. Very humble, very modest. The reason he was so good was not because he was stronger or faster, it’s because he was smarter. His hockey IQ was just amazing. I always try to portray myself as an athlete as Wayne Gretzky because for me he was the best role model ever.”

Alex Ovechkin is the only current player in the same stratosphere as Wayne, and at age 35 with 15+ seasons under his belt and less than 170 goals to go, Jaromir Jagr (#3 all-time) believes Ovi can dethrone The Great One.

“Earlier I thought Ovechkin doesn’t have any chances to break Gretzky’s goal record,” Jagr said. “It was six years ago. But Alex has changed and became a better and more effective hockey player than he was in [his] youth. I think he works harder now. He’ll be able to [break Gretzky’s record] if he can stay healthy and keep working as hard as now.”

After surpassing Phil Esposito for the sixth spot just last month with an absolute laser, the Twitterverse is beginning to align with Jaromir.

Ovechkin only being 165 goals away from Gretzky's record is pretty wild. No COVID and I think he has a good shot. Still possible now but he'd likely have to play until he's 40+.

HE IS RISEN AND ALEX OVECHKIN IS ONE GOAL CLOSER TO GRETZKY, WHAT A DAY

While St-Pierre’s confidence in Gretzky’s record remaining intact is a reasonable one, I long for the day in say, April 2024, when Ovi rifles one top shelf for his 895th and becomes the sole owner of one of the most impressive records in all of pro sports. FEED ME THE ADRENALINE!