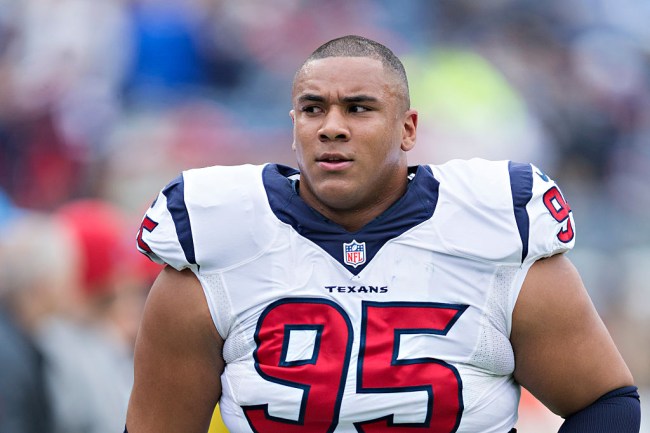 Texans defensive end Christian Covington isn’t exactly a household name. The Texans sixth-round pick in the 2015 draft has posted modest numbers for his squad–31 tackles and 4 sacks in 38 games. The 24-year-old Rice product could secure a starting job this season and have a breakout year, but if I passed him on the street before writing this, I couldn’t tell you his name or what team he played for.

And it seems like the folks at EA Sports couldn’t either, if the avatar they created for him for Madden ’19 is any indication. Not even close.

I imagine the developers at EA Sports were under a time-sensitive deadline that was only made more unattainable by playing the game they created for most of the day. They had like three players they still needed to construct, Covington being one of them.

EA Sports Guy: “Hey, you got any idea what this Christian Covington looks like?”

Guy 2: “Uh, beats me. Just make him look like a mixture of MMA fighter Daniel Cormier and a Snood character.”

Guy 1: “Which Snood character though, the yellow stop sign shaped guy with glasses or the purple triangle with horns?”

Covington took notice of his piss poor avatar and jokingly aired his frustrations out on Twitter.

Guess I have to accept the fact that I’m ugly now…. Say it ain’t so Madden…. smh pic.twitter.com/fTcmitdrEw

You think that's bad, they made Trent Taylor look like my ugly ass… pic.twitter.com/kw3obl9V2U

Could be worse, at least it’s not a statue pic.twitter.com/eFk9a5LReC

Knew I recognized that face from somewhere pic.twitter.com/UIay8BGMtH

They tried to play u bruh. That's Bill Nunn. pic.twitter.com/6LN5iY4Ml9

This was you when you saw that huh pic.twitter.com/JgYLM4o6X5

Why they make you look like you got meat sweats fam

Christian, don’t hang your blockhead. At least you made it into a video games. That’s more than us bozos can say.