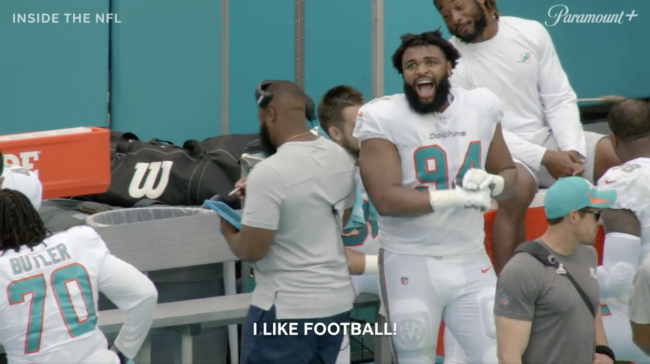 When it comes to having fun on a football field, very few people do it better than Miami defensive end Christian Wilkins. The 25-year-old from Massachusetts wore a microphone during Sunday’s game against the Giants and the resulting video could not be funnier.

Wilkins LOVES football and he does not care who knows.

Throughout the mic’d up video, it cuts back to Wilkins on the sideline screaming about the sport. And then, at the end, he turns to inside linebacker Vince Biegel and the two talk about how much fun they are having.

In between those cuts, Wilkins is up to his usual hilarious shenanigans. The 6-foot-4, 310-pounder has been famous for his antics since his days at Clemson.

You might remember him celebrating the 2016/17 National Championship with a split. He’s rather nimble for a big fella.

Although he didn’t break out the splits while wearing a mic on Sunday, he still provided plenty of laughs.

At one point, New York running back Saquon Barkley came over to shake his hand. Wilkins slapped his hand away, letting him know that he will shake hands after the game with one of his trademark belly laughs.

And then when his teammate Jerome Baker goes to shake Barkley’s hand, Wilkins slaps his hand away too. Later in the video, he can be seen asking the ref to reconsider the spot of the ball on the field.

The entire video, though just a short clip, is 52 seconds of pure joy. Take a look:

I, too, like football, Christian. Football really is so fun.