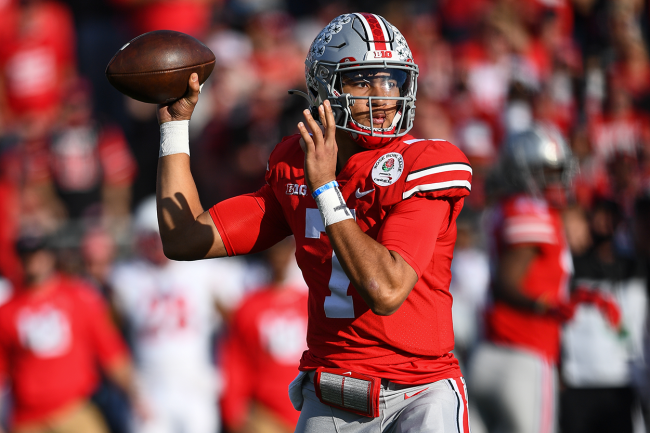 As the 2022 college football season sits in the distance, there appears to be a two-man race for the No. 1 overall NFL Draft pick. After a year in which only one quarterback was drafted in the first round— and late in the first round, at that — there will likely be two quarterbacks selected in the top five picks in April.

Either Ohio State quarterback C.J. Stroud of reigning Heisman Trophy winner Bryce Young will go first, and barring unforeseen struggles or a rise from someone unexpected, the other will go next. It’s more than likely going to be a coin flip based on how both guys play this fall.

Although Week 0 is still two months away, Stroud showed off his arm on Tuesday night. As the Elite 11 finals gets underway in Los Angeles, the Buckeyes signal-caller is in attendance as a coach/mentor for the finalists.

While at the event, Stroud couldn’t help but get in a few throws of his own.

He was ripping the ball over the middle with just a simple flick of the wrist.

CJ Stroud is a really good participant at Elite 11 pic.twitter.com/8jtsy27Y39

And then he really was impressive with his touch pass. Stroud has a lot of talented receivers this fall, including the freakish Marvin Harrison Jr., so jump ball touch passes to the corner of the end zone will be something that could prove to be deadly for Ohio State. Especially if Stroud is dropping dimes in a bucket like he was on Tuesday.

His ability to place the ball where (theoretically) only his guy could go get it is uncanny, take a look:

Stroud is one of the Heisman frontrunners. If he can throw as well against defenses as he does air, the Buckeyes are going to be a force.