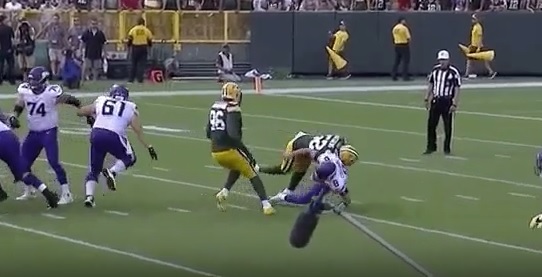 The NFL’s new roughing the passer rule dubbed the “Aaron Rodgers rule’ has been a source of controversy ever since it was first implemented during the preseason.

The rule states that players must not “land on top of him with all or most of the defender’s weight” when attempting to sack the QB. The rule was put in place to prevent the injury that occurred when Anthony Barr drove into the Packers QB Aaron Rodgers after a tackle last season.

The rule may have cost The Green Bay Packers a win in today’s game when Vikings QB Kirk Cousins threw a late-game interception but was later changed to a roughing the passer penalty because Clay Matthews landed on Cousins while attempting a sack.

The Vikings were then able to tie the game with a field goal a bit later and Packers fans weren’t happy.

This game should not be going to overtime. What a horrible roughing the passer call on Matthews.

Curious what the explanation would be for that roughing-the-passer penalty on Clay Matthews. Last week? Totally deserved, clearly late. Today? Not sure what he could have done differently.

You could make an argument that roughing the passer call on Kirk Cousins was the worst call in the history of sports officiating.

Wow. What's the explanation of this call?

The game is only tied because of the worst application of roughing the passer the NFL has seen this season.

It wasn't where he hit him, it was pile-driving him into the ground.