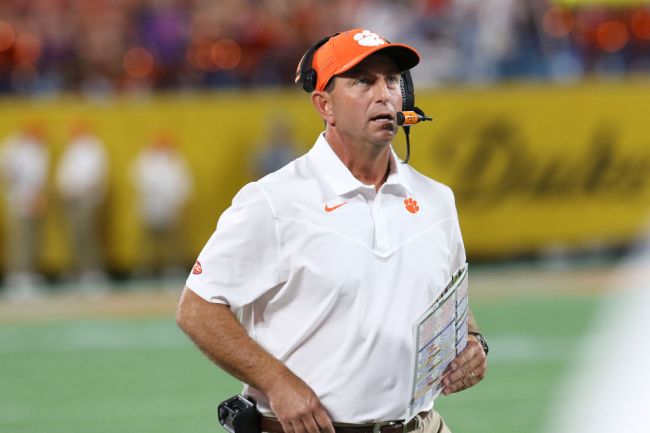 Dabo Swinney isn’t a stranger to expressing his feelings about certain subjects, and it’s become pretty clear as of late that he doesn’t particularly care for all of the changes in the college football world.

Swinney isn’t on board with conference realignment, hates the fact that players can now be paid on their name, image, and likeness, and has now picked a battle with the transfer portal.

The Clemson head coach has been asked about the transfer portal more and more over the past few weeks for two reasons. First, believe that the Tigers didn’t take advantage of the portal this past offseason. Second, Clemson has started the year 3-2 and is currently an unranked program, so the question of having the best personnel on the field is a valid one.

Swinney is tired of hearing about the transfer portal, however, he made that very clear during his press conference on Tuesday.

“Boy, weekly transfer portal question,” Swinney said, according to Anna Hickey. “Is it like who’s got the short stick this week? I wouldn’t change anything. We aren’t 3-2 because we haven’t signed someone from portal. Give me a break. I’ve said this 100 times. If we need to use the portal, we’ll use it. I’m not anti-portal. I don’t know why people keep asking me that.”

After fielding another transfer portal question, Dabo quips as he’s walking out of the room: “man I can’t wait until we sign our first transfer portal player. He better be Joe Namath or somethin!”

On the one hand, you can’t fault Swinney for believing in his players and staff, but on the other, the finger pointing is going to continue if Clemson’s season continues to move in the wrong direction.

The Tigers play visitors to Syracuse on Saturday, a game they should be able to handle with ease.