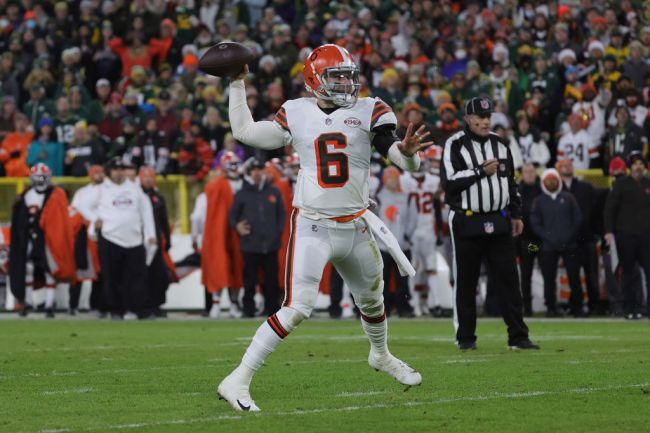 It has been more than two months since the Cleveland Browns acquired Deshaun Watson, but it doesn’t seem like they’ve gotten much closer to trading away his predecessor.

Instead of news about a trade, fans have gotten 2 months worth of stories about how everything that was wrong with Baker Mayfield during his time as the Browns’ starter and how awful of an environment he made their locker room. Meanwhile, the Browns find themselves wondering why they’re having such a difficult time trading him.

This week we learned that Baker had at least one teammate who enjoyed playing with him. While speaking at Browns OTAs, Nick Chubb praised the Browns QB.

Nick Chubb on Baker Mayfield: “He’ll still always be one of my best friends. He’s a great guy. I know with his intensity and his attitude, wherever he lands, he’ll be ready.” #Browns

If there’s any offensive player who thrived with Baker Mayfield leading the Browns, it’s Nick Chubb. Chubb joined the Browns as a part of the same draft class as Baker and has spent the 4 years since establishing himself as one of the best running backs in the NFL.

In those 4 seasons, Chubb has racked up an impressive 4816 yards and 36 touchdowns rushing while averaging a stunning 5.3 yards per carry. He has finished 2nd in the league in rushing yards twice and been selected to 3 Pro Bowls. Chubb’s rushing success is likely at least part of the reason why Baker Mayfield’s numbers with the Browns haven’t been overly impressive.

The Browns have often turned to the running game over the last 4 years thanks to the talents of Chubb and Kareem Hunt.

Maybe the Browns’ best offensive player publicly praising Baker will help the Browns finally find an interested party to trade him to.