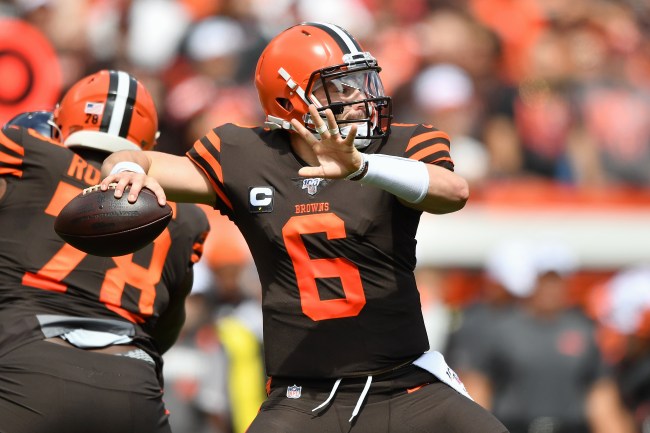 The Cleveland Browns had an offseason that resembled a video game, acquiring talented players like Odell Beckham Jr., Kareem Hunt and Olivier Vernon, among others, which made them a trendy pick to not only win their division, but, yep, actually get a ton of bets to reach the Super Bowl. While that may still happen, the team’s Week 1 performance against the Tennessee Titans doesn’t offer much hope, as the Brownies got spanked 43-13, which caused the entire Internet to crap all over them for being, well, the Cleveland Browns.

This year was supposed to be different for the Browns. They have an apparent star at quarterback in Baker Mayfield. They have a stud defensive lineman in Myles Garrett. They have a Pro Bowl cornerback in Denzel Ward. They were (are) supposed to be the next big thing who, in Garrett’s mind, could become the Golden State Warriors of the NFL. Sadly, nobody’s buying that thought after the first game.

Even worse, just as the hype train was full of people, the embarrassing loss to the Titans seems to have let a lot of those fans off the ride. That’s because, according to a FOX Business article, ticket sales for upcoming Cleveland Browns games have actually fallen off a cliff — proving that the NFL really does mean “Not For Long,” as in, if the Browns keep sucking, the team’s fans won’t be packing the stadium for much longer.

According to TickPick, a secondary market for sports and entertainment tickets, the get-in price to the Cleveland Browns Week 1 game was $181. Since the drubbing to the Titans, though, that number has dropped 21 percent to $141 for the Week 3 game against the Los Angeles Rams — which, hypothetically, should actually be a bigger draw because they’re the reigning NFC Champions. Naturally, it’s failed expectations that’s being looked at as the culprit.

“The Browns had a remarkable offseason landing some of the top free agents, most notably OBJ, and expectations couldn’t have been higher. But then they come out [on Sunday] and completely flop — it was a massive disappointment,” Brett Goldberg, TickPick co-founder and co-CEO, told FOX Business. “We saw demand drop significantly as a result, with both the get-in and average listing price dropping significantly. Usually, a Week 1 performance doesn’t create such a major drop in prices unless a star quarterback gets hurt — like Aaron Rodgers last year when there was speculation he was done for the season, or when Tom Brady tore his ACL in 2008. Given the Browns hype and expectations though, this is a unique situation.”

So, basically, Cleveland Browns fans are as pissed off as a team who lost future Hall of Fame quarterbacks due to injury. Yep, that’s how bad the franchise and the stigma around the organization has been in the past 20 years. Welcome to sports fandom hell, guys.

While ticket prices to Browns home games have dipped, so too have the prices for their games on the road, with TickPick reporting that the team’s Week 2 game against the New York Jets — which is in the primetime slot on Monday Night Football — also fell 5 percent, with the average ticket price going from $193.55 to $183.57.

The team has one terrible loss and, boom, just like that, Cleveland Browns fans are already throwing in the towel. Pretty pathetic.