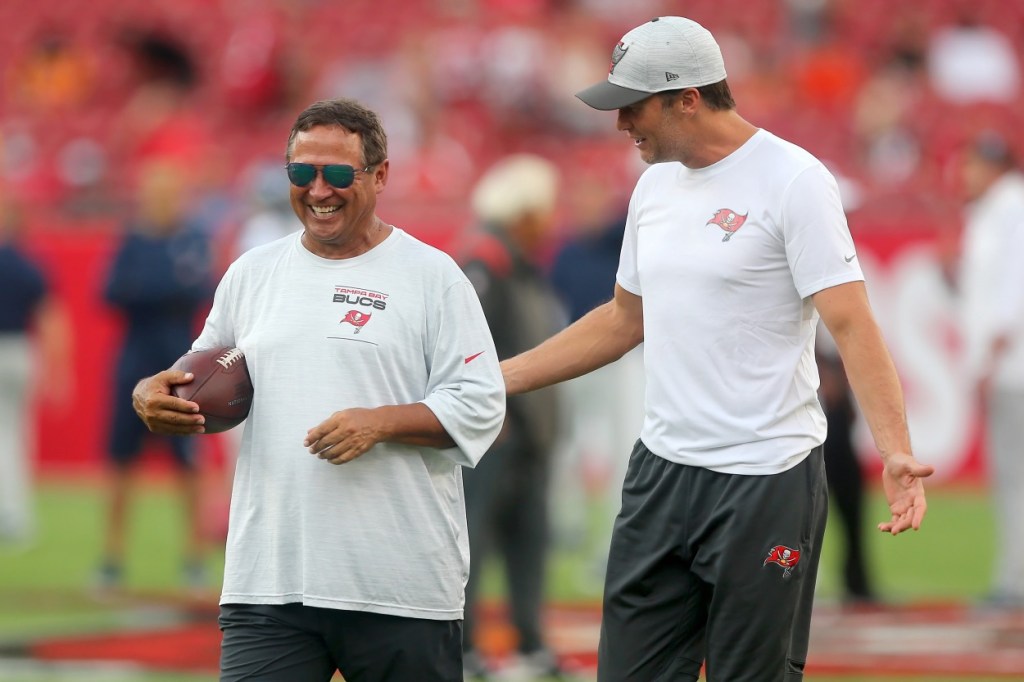 The Tampa Bay Buccaneers organization looks drastically different today from a month ago. Tampa’s roster is without the greatest football player in history, Tom Brady, and wide receiver Antonio Brown who was released on January 5th after he notoriously walked off the field mid-game at Met Life Stadium.

Speaking with CBS Sports Radio this week, Tampa Bay quarterbacks coach Clyde Christensen discussed the Antonio Brown incident. Specifically, he discussed how quickly it all unfolded and the biggest regret about the entire situation.

Christensen expressed how emotions run incredibly hot on the sidelines and it’s true. A minute can feel like a lifetime in the trenches. Antonio Brown’s blow-up happened so fast that nobody was able to process the situation or intervene. Hre’s what he had to say about regret.

“I just hate that it escalated so fast. I just think that, you know, everyone’s uptight as those games go on, especially receivers. Anyone who’s been on an NFL sideline knows how intense that can get.

I think this one escalated and the thing that was so sad to me about it was that we didn’t even get between a series. It was in the middle of a series that you saw a career end, or whatever happened, in the middle of two plays. It wasn’t like Tom [Brady] could come over and sit down and talk with (Brown). Or Byron Leftwich or a lot of teammates that have known him for a long, long time. I think that the sad part to me was that it escalated so fast and just, you know, it was too quick and too severe and I wish we had had a chance for cooler heads to prevail and talk through it and work through it. . . . I think the severity of how the way it ended, it just happened too quick. I wish it would have been different.” (via Joe Bucs Fan)

Antonio Brown had 4 touchdowns in only 7 games with Tampa Bay in the 2021 season. It’s clear that he was an asset and a crucial weapon on Tampa Bay’s offense. The Bucs would have been fortunate to have AB against the Rams in the playoffs and the Bucs could be playing for the Super Bowl this weekend if things happened differently.

This isn’t related to Antonio Brown but I wanted to share one of my new favorite Clyde Christensen stories. This one is from the Pat McAfee Show yesterday where Clyde told Pat “that Tom Brady sometimes asks him how many Super Bowls he’s been to. “I’ll say three and he’ll go ‘pffff'” … “But I do say this: none of them have an asterisk on it.” I’ve always thought that being Tom Brady’s QB Coach has to be the single greatest job in the NFL and it sounds like it was even more fun than I thought.

Clyde Christensen’s job is about to get a whole lot more challenging without Tom Brady. The team hasn’t announced what they’ll do at quarterback next season but GM Jason Licht expressed a vote of confidence in 2nd round pick Kyle Trask saying “we’re not crowning Kyle as the heir apparent yet, but we feel very fortunate that we got him when we did last year because where he stacks up with quarterbacks in this year’s draft, (and) everybody’s going to have their own opinion, but I feel pretty good about where he stacks up with these quarterbacks. So, I feel like we made a good decision last year.” (via PFT)