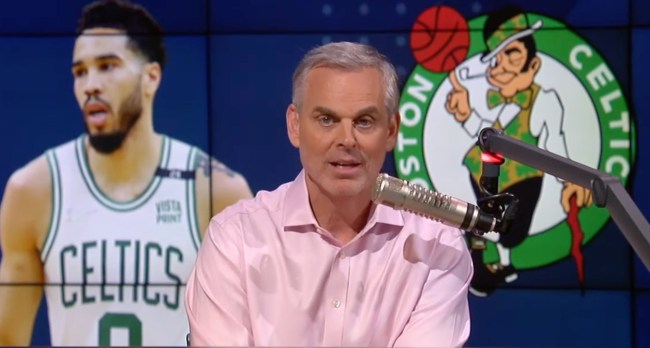 The Boston Celtics advanced to the Eastern Conference Finals on Sunday after knocking off the Milwaukee Bucks in Game 7. Colin Cowherd isn’t impressed, however. In fact, he hasn’t been impressed by the Celtics in the last 35 years.

Cowherd, who returned from a week-long vacation on Monday, warned the basketball world not to be excited by this Celtics team because we’ve seen this act before.

During Monday’s edition of ‘The Herd,’ Cowherd called the Celtics frauds without actually using the word ‘frauds.’ Instead, Cowherd compared the Celtics to reliable foods like yogurt and Wheat Thins, while referring to them as a reliable 401k as well.

You can’t talk about the Celtics and their history without talking about the Los Angeles Lakers. For Cowherd, choosing between the Celtics and Lakers as franchises is easy, he’d go with the Lakers in a heartbeat.

While the Lakers have won eight titles compared to the Celtics’ one over the past 35 years, going to bat for the Lakers at this point in time is a tough stance to take. Completely discounting the Celtics series win over the defending champs is also a bit of a tough look for Cowherd.

The Lakers were the laughing stock of the NBA this past season as things are a complete mess in La La Land.

The Celtics have a shot at winning a title this year, the Lakers finished 11th in the Western Conference. History is one thing, as is the Lakers’ willingness to ‘go for it’ as Cowherd points out, but history is also just that, history.

To Cowherd’s credit, we have seen this Boston charade before. The Celtics have made the Eastern Conference Finals four times over the last six years, it’s about time they get over the hump and at least punch a ticket to the Finals.