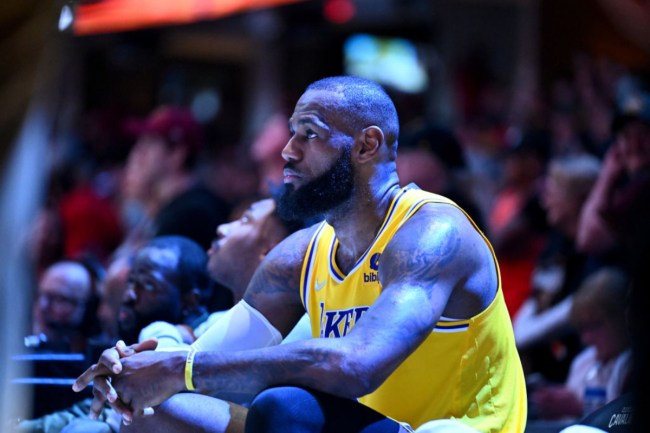 Despite LeBron James and the Los Angeles Lakers missing out on the playoffs after one of the most embarrassing seasons in NBA history, James and the Lakers are still getting dedicated segments on the worldwide leader in sports.

The topic on Wednesday’s edition of ‘Get Up’ was all about whether or not the Lakers should trade James.

Stephen A. Smith passionately suggested Los Angeles trade away arguably the greatest basketball player to ever live and Mike Greenberg took that idea a step further on Wednesday morning.

Greenberg is looking at this from LeBron’s point of view, not the franchise’s, and he thinks James should “want” to be traded by the Lakers.

“[LeBron] should want that! He has zero chance of winning a championship in L.A. in the next two years,” Greenberg explained. He has a much better chance of doing it someplace else.”

.@Espngreeny is agreeing with @stephenasmith … The Lakers should trade LeBron James 👀

"[LeBron] should WANT that! He has ZERO chance of winning a championship in L.A. in the next two years. He has a much better chance of doing it someplace else." pic.twitter.com/3tKrEl5KHu

The Lakers absolutely have to do something this offseason given that the franchise is a disaster at this point. The logical move would be to trade away Russell Westbrook seeing as hoe he’s not a fit alongside Anthony Davis and James, but no team in the NBA will want to take on his ginormous contract.

James had a huge role in the Lakers acquiring Westbrook in the first place, which turned out to do nothing but hurt the franchise.

The idea of trading James comes after team owner Jeanie Buss sent a warning shot to the team’s front office signaling that changes are in order.

At this point in time, it’s hard to imagine James wanting out of Los Angeles. He’s won a title with the Lakers, gotten a strong taste of the Hollywood lifestyle, and has some sort of decision-making power on one of the most recognizable teams in all of sports.