Jeanie Buss, Not Happy With The Current State Of The Lakers, Hints Changes May Be Coming 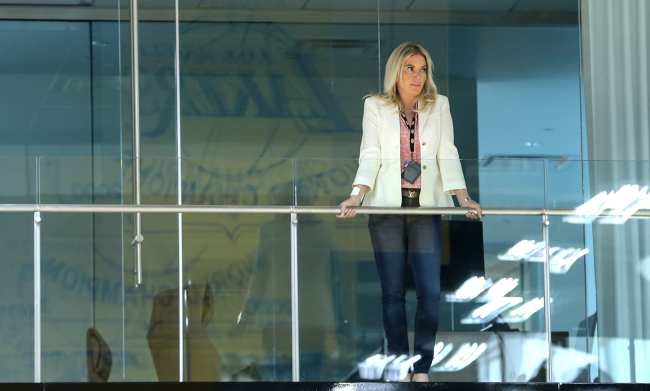 Beginning with the 2013-14 NBA season, the storied Los Angeles Lakers franchise has missed the playoffs in 7 of the last 9 seasons, including this year.

It was just two seasons ago that the Lakers went 52-19 in the regular season and blew through the NBA playoffs, going 16-5 en route to the team’s 17th championship.

A year later and the Lakers fell in the first round to the Phoenix Suns after a strong 42-30 regular season.

Two years later, and L.A. went a dismal 33-49 and didn’t even make into the play-in tournament.

Results like that are just not going to cut it for Lakers President and controlling owner Jeanie Buss.

“We don’t like to be missing the playoffs, I understand the fans anger and frustration,” Buss told the Los Angeles Times this week. “I’ve got to make it better.”

According to Buss, this changes are on the horizon.

“I will make the hard decisions, because that’s what you have to do,” she said.

The last time Jeanie Buss sounded like this her brother Jim Buss was fired as executive vice president of player personnel and general manager Mitch Kupchak, after 22 years on the job, was also let go.

“I’m growing impatient just because we had the fourth-highest payroll in the league,” said Buss. “When you spend that kind of money on the luxury tax, you expect to go deep into the playoffs. So, yeah, it was gut-wrenching for me to go out on a limb like that and not get the results that we were looking for. … I’m not happy, I’m not satisfied.”

“Do they have final say? No. Are they running the team? No, no, not at all,” said Buss. “I am controlling owner of the Los Angeles Lakers, I’m held accountable for every decision that’s made here.”

What those decisions will be, and whether any of them will involve the futures of Russell Westbrook and/or LeBron James, remains to be seen.

“We have to now find the right coach to lead this team,” said Buss. “Depending on the style of play that that coach wants to play, given the roster that we have, it all has to start to come together.”