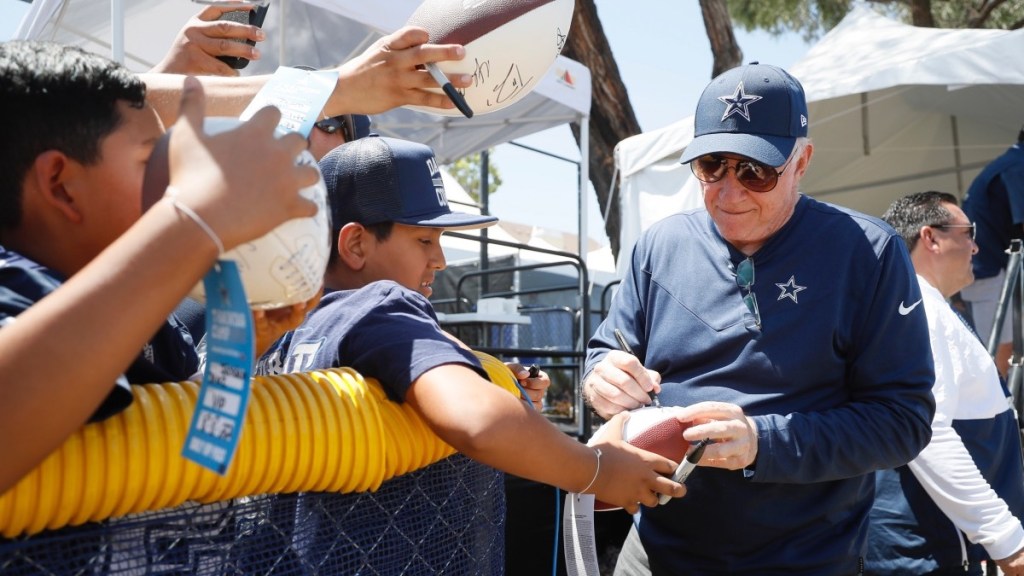 Dallas Cowboys owner Jerry Jones has presided over the most valuable NFL franchise for decades. He came into the league roaring and won 3 Super Bowls after buying the team on February 25, 1989, for just $140 million.

Currently, it has been 9,718 days since the Dallas Cowboys won their last Super Bowl on January 28, 1996. That is 26 years, 7 months, 9 days, and counting. Guys who were conceived that night and named ‘Troy’ after Cowboys QB Troy Aikman are now old enough to rent cars (25+).

The style of play in the NFL has shifted several times over since the Dallas Cowboys last won it all. And that’s a huge component in this video below from Colin Cowherd. Cowherd believes that Jerry Jones is turning Dem Boyz into the Raiders under Al Davis by living in the past.

Colin Cowherd Breaks Down How Jerry Jones Is Turning The Dallas Cowboys Into The Raiders Under Al Davis.

Depending on whether or not your’e a Cowboys fan, you might find yourself agreeing with a lot of what Colin Cowherd has to say here. His portion of comparing Jerry Jones and Dalls to Al Davis and the Raiders starts around the 2-minute mark. I’ve also transcribed some quotes underneath the video for people who prefer reading vs watching.

Colin Cowherd: “I think the (Dallas) Cowboys are turning into the Raiders when Al Davis got old. Al Davis and Jerry Jones are very similar.

They’re mavericks, contrarian, street fighters, visionaries, and then you start getting into your 70s and you start believing your press. And you’re not quite cognitively as quick. And I think Jerry’s had multiple missteps in the last several years, things he’s said that he’s had to backtrack on.

And I thought at the end of Al Davis’ reign, he really romanticized… He really lived in the rearview mirror… And I feel very much that way with the way Jerry Jones handles Zeke. As if it’s a running back league… As if you want your running back to be the biggest cap hit.

And I look at Dallas right now and I think they’re dangerously close to becoming the last 10 years of Al Davis’ Raiders. I think what saves them is the Division’s so damn awful. But I thought Philadelphia had a really, really good offseason.”

Coming soon to a Sunday near you 😂 pic.twitter.com/LiQcYqczvM

Al Davis’ Reign Over The Raiders

Al Davis is the only NFL executive in history to be an assistant coach, head coach, general manager, commissioner, and owner. He was a legend and the Raiders won the Super Bowl three times under his ownership from 1972 through 2011 when he passed away.

But those three Super Bowls came in the 1976, 1980, and 1984 seasons. Al Davis assumed owenrship of the Raiders in 1972 and looking at the full scope of his tenure, the Super Bowls were certainly concentrated to the earlier part of his ownership in the same way Jerry Jones’ Super Bowls are.

Between 1995 and 2011, the Raiders had just 3 seasons with a winning percentage above .500. With their best season of that era coming in 2002 where they went 11-5 in the regular season and went on to lose to the Tampa Bay Buccaneers in the Super Bowl.

The Raiders were absolutely dominant in the 70s and 80s but really fell off in the years since. A pattern that’s pretty similar to Jerry Jones and the Dallas Cowboys, and a pattern that Colin Cowherd isn’t out of place to point out.

Like Al Davis, Jerry Jones will never retire. The Dallas Cowboys are his team and they’re the most valuable sports franchise on the entire planet. It remains to be seen if the Dallas Cowboys and Jerry Jones can get back to the Playoffs this season but the NFC East is once again very winnable if they can get psat Philadelphia.

Nobody knows what it means, but it's provocative! https://t.co/utS5LKXlDV